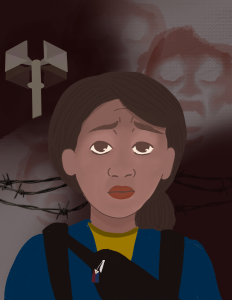 THE DAY before the Ukraine invasion was a normal day for Filipino migrant worker Joy Tolentino.

After work, she went to her phone—peacefully scrolling her social media—without anticipating the storm that was to come. She went to sleep feeling at ease. It was five in the morning of the following day when her phone suddenly rang—an unusual event for her.

On the other end of the line was a Filipino reporter, telling her that a war had begun in Ukraine.

The words woke her. She immediately got up from her bed and walked towards the window. She opened the curtains and saw what was happening outside: panic; traffic; an exodus.

She must immediately leave Ukraine, the country she left home for a living, to save her life.

A run for safety

Like Tolentino, other Filipino migrant workers in Ukraine also went to other places as the Russian invasion began. Some left by car and others by train; while some of them agreed on a particular meeting place to flee in groups and ensure safety.

Among them was Shirley Santosildes Tividad, who worked as a public school teacher. She arrived at a bus stop where she and other migrants had agreed to meet.

But unlike Santosildes, Tolentino chose not to join the other fleeing migrant workers. Tolentino opted to be with her employer going to Lviv, a city in the west of Ukraine, in the belief that it is safer there in case of emergencies.

Despite taking a different path, Tividad and Tolentino noted similar scenes of locals struggling to evacuate.

Tividad herself felt the struggle of escaping the chaos. She remembered ducking underground into subways every time a siren rang.

The mode of transportation also became limited, making it harder for her to go to their meeting place. But luckily, she found people—the parents of her students—who were willing to help and assist her and her companions.

Keeping themselves alive was as hard as finding a safe place to hide. Tolentino admitted that her stay with her employer’s care had caused her anxiety.

Every hour was a scene of hearing a loud siren and running to the bunker. To keep them safe from air strikes, no lights were allowed from 6 p.m. until 7 a.m.

Because of this, Tolentino left her employer’s residence and traveled to Austria despite knowing the possibility of her becoming TNT (in Filipino: takbo nang takbo, a term referring to illegal immigrants). She noted that immigrants are only allowed to stay for a month in that country even during a regional crisis.

Meanwhile, Tividad’s travel for safety was accompanied by daily calls from her worried family in the Philippines. Her family kept on asking her to consider coming back home.

The Philippine Embassy in Ukraine has provided assistance to safely send Filipino migrant workers back to the country. It also gave them cash assistance worth $200 dollars.

But Tividad refused the aid, believing that returning to the Philippines would make things more difficult for her and for her family due to limited opportunities back home.

“It would be expensive to return to Europe. I knew I wouldn’t have a job in the Philippines as a teacher. I didn’t want my family and me to struggle together,” Tividad said.

Jean Encinas-Franco, a political science associate professor at the University of the Philippines and a former director of the Senate Economic Planning Office, noted that overseas employment is prone to crises.

“Because the protection of Filipino migrants abroad is one of the pillars of our national interest, the government has to protect them in crisis situations. In the case of Ukraine, safe repatriation is its primary responsibility,” Encinas-Franco told The Flame.

“Though it contributes to better opportunities for migrant Filipinos, it makes our economy and the welfare of their families closely tied to developments in other parts of the world,” Encinas-Franco said. “Decent jobs in the Philippines are still the best way to protect our citizens.“

Soon after, Tividad and her companions left Lviv to go to Hungary, where an employer from one of her acquaintances was waiting for them. After enduring heavy traffic, immense hunger, and fatigue, they finally reached the border of Hungary.

She shared that there was some doubt when a free ride going to Budapest was offered, but the promise of safe transportation remained.

From Budapest, they continued their way to Austria, with no assurance that they would find the same goodwill they found in Hungary.

With the help of the internet and fellow Filipino migrant workers, Budapest greeted them with warmth. Tividad and all her eight companions were safe.

Meanwhile, Tolentino moved from country to country after leaving Austria. Currently, she is in France where she now resides. However, the horror of the situation continues to haunt them.

“We have some trauma,” Tolentino lamented. “Sometimes we think the sound of normal planes would be followed by a bomb.”

But despite finding safety in Hungary, Tividad eventually returned to Ukraine—much to the surprise of her companions—to continue teaching. On her return to Ukraine, she was the only foreigner.

Tividad was still worried and afraid as occasional sirens and warfare existed, but the practice of going to bunkers or walls from time to time became something she was accustomed to.

As of the first half of this year, the Department of Foreign Affairs has assisted 450 affected Filipino migrant workers in Ukraine with about 400 of them having safely returned to the Philippines.

As of Oct. 20, at least 25 Filipinos remained in Ukraine, and they are being closely monitored, given the worsening situation in the country. F – Lila F. Mortel

Editor’s note: This article was originally published in Vol. 58, Issue No. 1 of the Flame. View the entire issue through this link: https://issuu.com/abtheflame/docs/1st_issue_2022-2023_v8