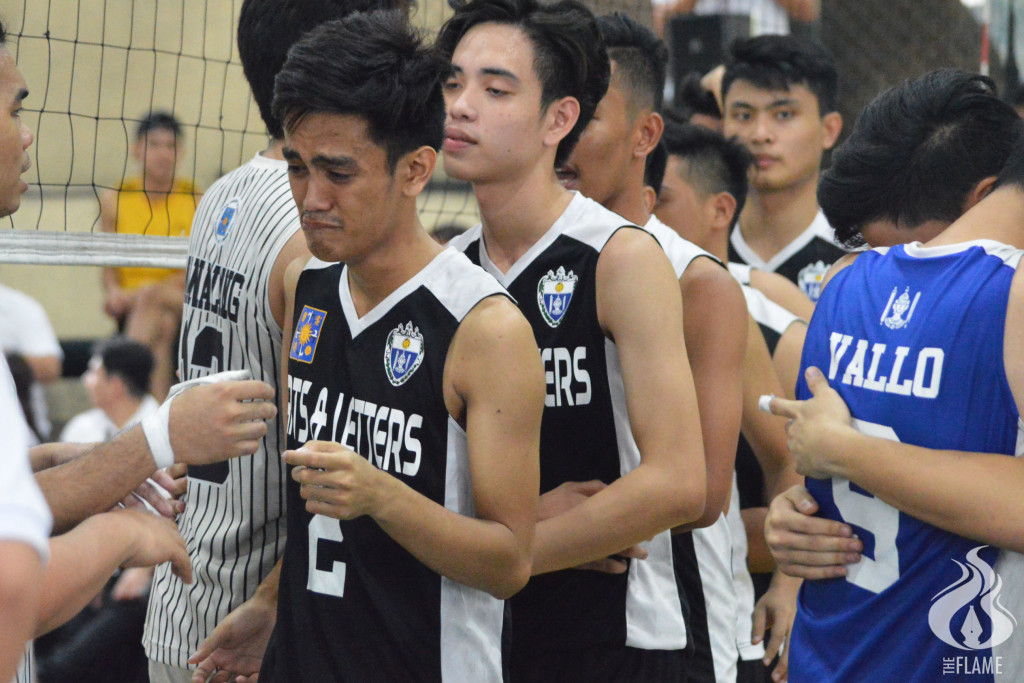 THEY TRIED to snatch this year’s championship from the defending victors, but fell short to the team whose players were once their mentors.

The Faculty of Arts and Letters (AB) Men’s Volleyball Team succumbed to the Graduate School (Grad School) in the game two of the Thomasian Goodwill Games Finals series, handing the reigning champions their back-to-back victory, 25-21, 22-25, 21-25, 25-16, and 15-7.

AB opened the first set with multiple errors, allowing a nine-point gap in the scores, 3-11, in favor of Grad School.

A barrage of powerful spikes from AB’s Wayne Parulan cut Grad School’s lead to three and brought the score to 19-22.

But Grad School would not give AB an easy fight and capped the first set, 25-21.

The Dapitan-based squad displayed a better floor defense during the second set.

Spikes from AB’s Russell Wilfred Estrada and consecutive blocks from Giuseppe Punzalan outplayed the reigning champions in the early part of the frame, 11-7.

Grad School committed an error, which enabled AB to win the game, 22-25.

AB continued to display its determination in the game as the team again owned the third set.

A parade of forceful spikes from Grad School’s Michael Manalang was not enough to snatch the lead from the strong-minded AB throughout the frame.

A short service from Grad School gave way for AB to rule the third set, 25-21.

The reigning champions’ losses during the second and third sets prompted the team to bounce back during the fourth frame.

Manalang relentlessly delivered powerful spikes to his opponents’ court, setting the score at 8-3 early in the set.

Errors committed by AB troubled the team to set its tone in the set, falling 10 points behind Grad School, 9-19.

Grad School claimed the win for the fourth set after a stepping error committed by AB, 25-16.

With a matching score of two all, both teams were determined to suit up during the final set.

But the Dapitan-based squad committed multiple errors during the early part of the frame, giving the opponent a quick six-point lead, 1-7.

It all went downhill for AB as its faulty run prevailed until the end of the deciding set, forcing the team to surrender their game three hopes, 15-7.