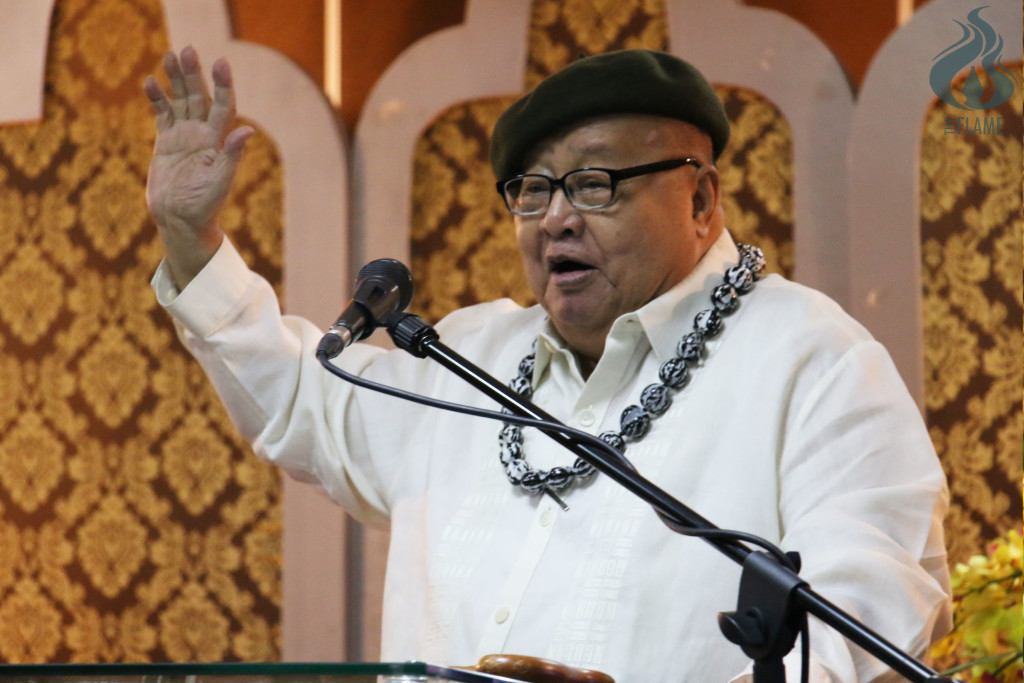 CREATIVE WRITING scholars and writers gathered at the University of Santo Tomas (UST) from April 20 to 22 to review the roles of literary writers in the nation and the rise of alternative platforms for the preservation and propagation of literature to younger generations.

National Artist for Literature Bienvenido Lumbera said literary writers, through their works, influence their readers’ views on the realities of the society.

The language used by writers in their works aids the transmission of ideas and increase in readers’ awareness on the significant events in the society, Lumbera said.

“How the language [is] used in the writing of their stories put them in touch with others. [It] could insulate them from the realities of the Philippine society at the time the story was written or it could trigger off their awareness [on] the conditions in particular historical time,” the National Artist said.

Lumbera, a Carlos Palanca awardee, also received the Ramon Magsaysay Award for Journalism in 1993. He holds the title of Professor Emeritus in the University of the Philippines.

Francisco Sionil Jose, also a National Artist for Literature, reminded the writers of their duty to give their audience a “contextual” view of various national issues.

“Write not only for yourself, but for our people. Be true to them as you will be true to yourself. Be contextual, be involved, and politically aware of the nation’s problems. Be engaged and take pride to identify our enemies,” Jose said.

“Literature, [as] an art, doesn’t know the borders in the sense that imagination has no boundaries. Do not do it (writing) because it is compulsory. Do it for our God and our nation,” the National Artist added.

Moreover, Artlet professor and author Eros Atalia lauded the Filipino teens who publish their stories on Wattpad, an online writing platform and community, despite having their works regarded by some as “a far cry from good literature.”

“They write this way because they live in different frames. […] Books are expensive. Wattpad [and] online stories are free. So as long as they want to read and write, let’s give them credit. Wattpad is their alternative platform,” Atalia said.

“I hope these young literary enthusiasts will set the bar high for Wattpad and other alternative platforms, and yet raise this for all thirsty incoming readers and writers who cannot be part of the university or literary circles,” he added.

Christopher Merrill, director of the International Writing Program (IWP) in the University of Iowa, said creative writing workshops hone and exhibit the skills of budding and seasoned writers.

“[Through creative writing programs], we learn to support one another in our collective works. […] We do this by offering close readings of one another’s work, trading books and insights of creative process. In urging our fellow writers to experiment, [we] expand the writing of what literature can be, and persist,” Merrill said.

IWP is a program for emerging writers and poets across the globe. The program has produced 1,400 writers since 1967.

The three-day event was held at the Dr. George S.K. Ty Function Hall, Buenaventura Garcia Paredes O.P. Building and was sponsored by the United States Embassy in the Philippines. It was co-organized by the UST College of Education and the UST Department of Filipino. F ANGELIQUE ANNE F. TORRES and VANN MARLO M. VILLEGAS