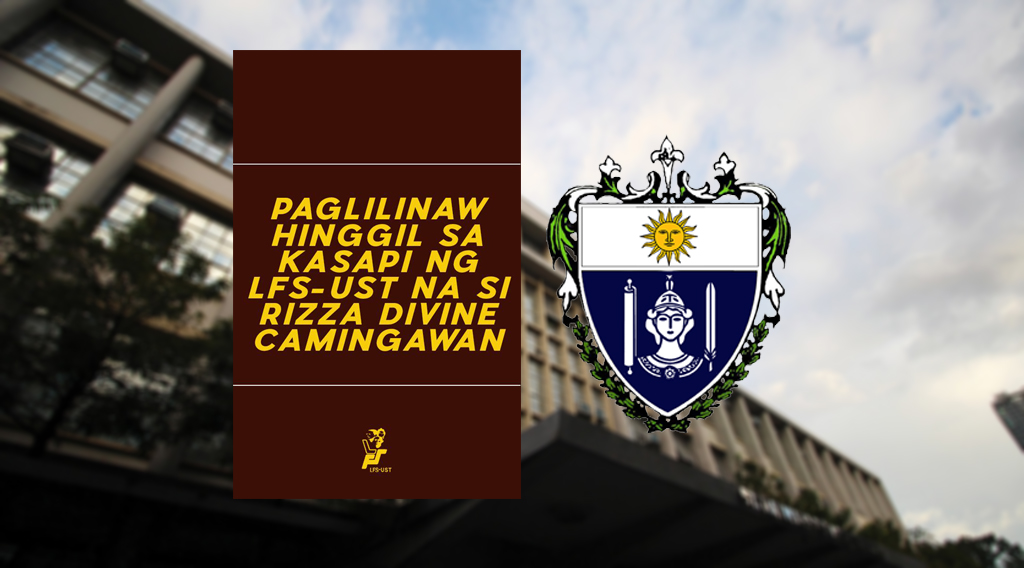 LEGAL MANAGEMENT freshman Rizza Camingawan is not missing, the League of Filipino Students-University of Santo Tomas (LFS-UST) clarified after the news of the LFS member’s alleged disappearance made rounds on social media.

In a statement released Thursday on their Facebook page, LFS-UST said Camingawan has contacted her parents and informed them that she is safe in Quezon province where she is taking part in an immersion program with farmers, an activity that LFS offers to its members.

In an interview with the Flame, Asst. Dean Narcisa Tabirara disclosed that Camingawan’s mother approached the Dean’s Office to find out more about her daughter’s affiliations.

“[S]ome time before classes ended, […] I was able to talk to the mother, who inquired, or was simply informed, that her daughter was participating in some activity that had to do with the Lumad,” Tabirara said.

On their second meeting, Camingawan’s mother told the assistant dean that “her daughter actually left for the seminar, but came back so wala naman siyang masyadong fears really, because she believed she was doing something good.”

“But then, after two days of being at home, she just found a letter stating that her daughter said in that letter that she was going to be away for a longer period of time and that it was not possible for her to have any contact with anybody,” Tabirara added.

The assistant dean said she directed Camingawan’s mother to the Simbahayan office for assistance.

“I know that Prof. [Froilan] Alipao (Simbahayan assistant director) and the Simbahayan were involved in some activities related to the Lumad.  Baka matulungan niya ‘yung nanay para ma-trace siya or at at least get to know the whereabouts of her daughter. So that’s as far as our help consisted of,” she explained.

“The decisions that she made for herself are personal; hindi naman ‘yun in-endorse ng office. She was not supposed to have been engaged in any extracurricular activity that is not sanctioned, or endorsed, or even organized by AB,” she said. F