by JUSTIN LIM and JANIS MOISES 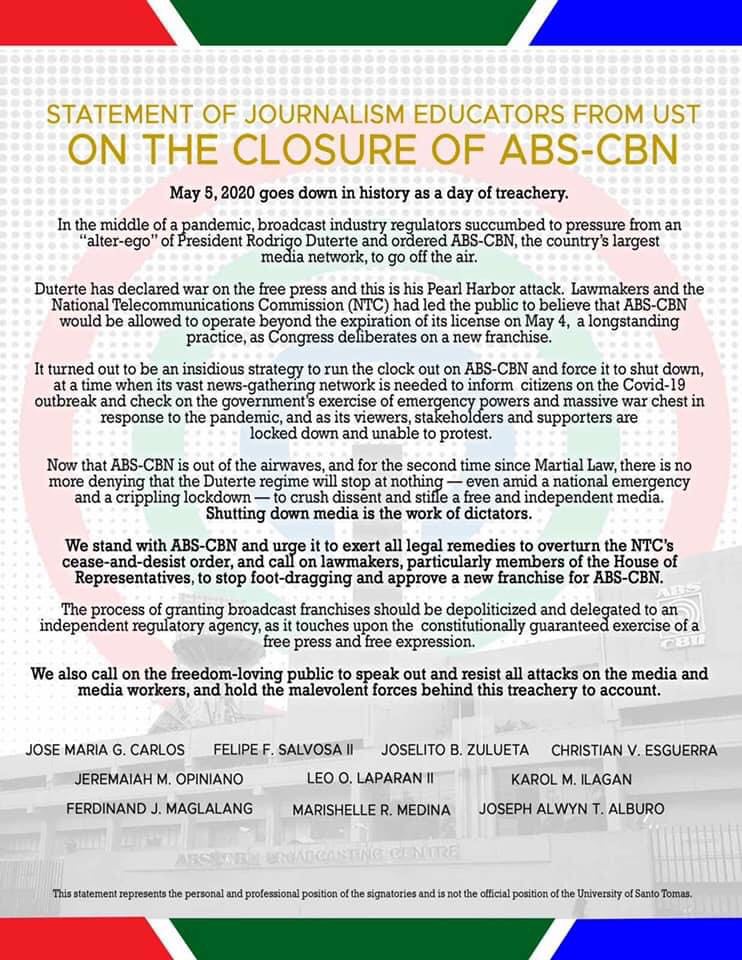 the official statement of the journ faculty from the Facebook account of Mr. Felipe F. Salvosa II, the UST Journalism program coordinator.

JOURNALISM EDUCATORS from the Faculty of Arts and Letters on Tuesday slammed the order of National Telecommunications Commission (NTC) for broadcast network ABS-CBN Corp. to cease operations after its legislative franchise expired on Monday.

In a statement, the faculty called on lawmakers to renew ABS-CBN’s franchise and urged the broadcast firm to exhaust all legal remedies.

“Duterte has declared war on the free press and this is his Pearl Harbor attack,” they said.

The journalism professors also branded the delay in renewing the network’s franchise an “insidious” strategy to “run the clock out on ABS-CBN and force it to shut down.”

House leaders repeatedly assured ABS-CBN in the past that they would be allowed to operate past Monday pending the renewal of their franchise.

The Senate and Department of Justice likewise agreed that the broadcast firm would still be allowed to continue operating past the expiry of its franchise.

However, President Rodrigo Duterte has often expressed his contempt toward ABS-CBN as the network allegedly refused to air his political advertisements during the presidential campaign in 2016. The network has denied the accusations.

He also threatened to impede the network’s franchise renewal on several occasions, yet insisted that the decision was exclusive to lawmakers.

“Now that ABS-CBN is out of the airwaves, and for the second time since Martial Law, there is no more denying that the Duterte regime will stop at nothing – even amid a national emergency and a crippling lockdown – to crush dissent and stifle a free and independent media,” the journalism faculty said.

ABS-CBN was granted a 25-year broadcast franchise on March 30, 1995 that expired on May 4 this year because the law took effect 15 days after publication, according to the company.

The NTC has allotted a 10-day window for the station after the issuance of the cease and desist order to explain why it should be allowed to continue operating.