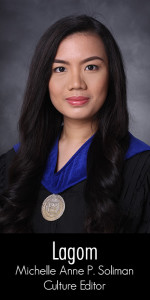 “WATERLOO – I was defeated, you won the war,” were the first lyrics I carelessly sang in class (if I recall correctly) during my freshman year. I was fond of listening to ABBA during the early hectic days in college. This song in particular is about defeating your weaknesses. However, my college life was not about the tendencies of defeat in spite of all the challenges. Instead, it was a battle – the most unexpected battle I fought (so far).

“What’s the name of the game? Does it mean anything to you?”

When I was deciding on which degree program to take up in college, I was lucky enough that my parents were supportive with the idea of me choosing a liberal arts program. On the first day of my University life, I unknowingly entered a battlefield.

In the process of learning, there were two types of battles I experienced within my four-year stay. The first was working hard through activities where our knowledge and skills were not enhanced or utilized that much. Many of our class and group projects involved tasks that heavily relied on specific skills. However, we had to learn and acquire the techniques among ourselves. I acquired much of my skills by learning independently and by seeking help from others who knew a thing or two.

It was a challenging battle, as we had to figure a lot of it on our own. Once it was done and executed, we were seldom told about what went wrong or what to improve on. Instead, we received approval and praises not knowing if all the elements did fit perfectly. This is where I found it difficult to accept the recognition gained from working hard on something I felt would have been better if we were more inclined to accomplish it.

I may have become a top-notcher in a major subject but I still felt that there was still more to learn. It is hard to live up to an accomplishment that was half-heartfelt despite the toil that was poured into it.

The second battle was working hard through activities, where we hoped our efforts would be rewarded, but unfortunately we fell short. It is also difficult not to see where you’re heading and discern if what you are fighting for is worth it.

Could you believe that a previous top-notcher would eventually fall short on a major subject two semesters after?

Yes, it was all too sudden. It was the first time in my entire college life. It was the toughest among the battles. But I had to own up to it and finish the fight.

In the middle of my stay, I doubted my previous decision and considered the possibility of transferring to another university. But I thought to myself that I was the one who chose this path. I might as well move forward and finish it.

Had I pushed through enrolling in another university, I would not have been part of the Flame. Joining the Faculty’s official student publication was a totally new experience. Just when I thought I no longer had a shot at pursuing writing, my amateur skills eventually qualified for the publication.

As a staffer, I adapted lessons and past experiences from my academic life and incorporated them in my legwork and coverages. I have learned that gathering information is not just limited to reading written accounts. Gathering your estimated number of insights is most of the time not enough, and working on location means sacrificing what could have been your ‘me time.’ Writing your story (no matter how much you’re into it) could take until the wee hours to finish. And the list goes on.

None of these would have been possible if not for my former editor, Andy. Thank you for giving me the opportunity to attend events, meet different people, go crazy with free food and write about them.

Thank you to my EB, Arnel and Rose, for making the craziest decision of officially appointing me as Culture editor and challenging me to bring out my best ‘cultured’ self in order to do the same to my writers.

To Margaret, Charissa, and Lorraine: Thank you for your dedication and hard work. To my fellow editors, we did it!

Thank you, mom and dad, for allowing me to pursue the path I chose and supporting me all the way.

During the weekend prior to my first petition class, I saw the 1937 Hollywood classic “A Star is Born,” where I took to heart the most striking lines I just needed to hear:  “Tragedy is a test of courage. If you can meet it bravely, it will leave you bigger than it found you.”

Indeed. The tragedy, the battles, and the fights left me stronger and wiser than when they met me.

Based on everything I have experienced throughout my stay at the university, I’ll leave you with this message: Never let anyone allow you to do things that are an insult to your capabilities. No one has the right to tell you that you are incompetent for they are not fully aware of your strengths.

Surely, “you can take the future, even if you fail.” As for me, I crossed the stream.