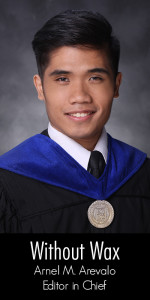 I REMEMBER how uncertain my purpose was when I first entered the halls of St. Raymund’s Bldg. wearing my white polo barong and black trousers. Besides, during that time, I was only thinking of how bad the consequence of my fickleness would be. When people ask me why I chose Behavioral Science (BES) as my second choice, I always tell them that my only reason was that the degree just sounded good to my ears. I only realized that I did not want to enroll in BES when the results came out. I wanted to escape—yes, I tried deferring my enrollment in AB and transferring to Chemical Engineering—but to no avail.

University of Santo Tomas offers the best campus life, I must say. Still, my first few months in AB, more so the succeeding years, were marked with dissatisfaction. Mediocre lectures and discussions, tardy professors, and everything that made me feel as if I was shortchanged concerned me. This, along with my existential crisis during that time, prompted me to find a way to be a part of the solution.

And so, in an attempt to do something worthwhile, I applied to the Flame, bringing with me the passion and thirst for change equivalent to that of Duterte supporters. I still remember the day I received a text from my editor telling me that I passed the qualifying exam. Since then, my friends have always associated the Flame with me, perhaps because I went against the stereotype that only Journalism, Communication Arts, and Literature students can join a student publication.

Every time I write and do legwork for the Flame, I feel like I am saving the Faculty from apathy. When I became an editor, I wanted to impart the same feeling to our writers. Apparently, I have found my purpose as an Artlet—I wanted to be a soldier of truth. The magazines we publish became my battleground. The pen was my faithful weapon.

My four years in AB and as a staffer of this publication can be described using the overused theme of our college-wide celebrations—carnival. I have witnessed different things. I had a firsthand experience of how campus press freedom can be curbed by school officials when they told us not to publish a special report on a sensitive topic. I have seen how Artlets gave up and lost hope in the Faculty’s institutions when their money was lost and their Type-B uniforms were nowhere to be seen. There were many games. Some we have won, others we have lost.

I was a witness of how the Flame became more relevant as it increased readership, for as we closely monitored the institutions in AB, they had likewise become wary of the articles we published. It has become a healthy system of checks and balances. We have learned from them as much as they have learned from us. The publication has really altered the landscape of the Faculty.

I consider myself a leader more than a writer. I would be lying if I say that I never considered entering school politics. But seeing how dirty it is, I thought that perhaps I could use my position and influence in the Flame instead to safeguard the interests of Artlets against the personal agenda that some groups may have. As Editor in Chief, I am fulfilled when student leaders rush to the news racks and read our magazine for I know they are aware that they are under watch. I am elated when Artlets share the link of our stories with their reactions as caption. These simple acts validate our faithfulness to our vision of igniting the intellectual senses of our readers.

Student leaders and even the Faculty administration have taken notice of our sheer bravado and complained—formally and through the grapevine—about how “negative” and “biased” our reportage is. Every time I hear this, I want to ask them: If not us, who will tell these stories you refuse to disclose?

Now that I am to leave the University and my beloved Faculty, I hope that many Artlets will continue the fight we have started. We have done everything we can to be of service to the Artlet community. I will leave AB with peace of mind, knowing that it is now a better place from what it was four years ago. But the fight is far from over. My ardent prayer is for every stakeholder—students, faculty members, administrators, support staff, and alumni—to avoid settling for less and continue re-examining themselves to see what else they can do to restore AB to its former glory.

Dear Artlets, continue seeking and demanding for the truth. Do not let anyone deprive you of the very reason why we are studying the liberal arts—to know.

I shall return and serve you once more, beloved AB. For now, my watch has ended.
***
I’d like to thank everyone who made an indelible mark in my life throughout my four-year journey. To my parents, esteemed professors, 4BES1, fellow Flame staffers, editors and alumni, Mr. Nestor Cuartero, and closest friends, I will forever remain grateful.

And to you, dearest KHML, for being the personification of without wax in my life. F