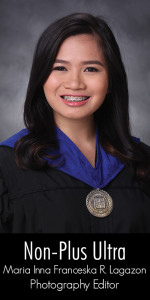 FOUR YEARS ago, I entered the Communication Arts program wanting to be a film director. I wanted to make movies that made a difference—at least half of my then new blockmates also did. UST was not my dream school, I was planning to transfer to UP on my second year to take up Film but that obviously never happened. I slacked off in my studies, making an excuse of what we would call the “adjustment period.” During the second semester of that “adjustment period,” I drowned in frustration as I was one of the handful of students randomly chosen to fail at a particular subject. I could not understand how my professor gave me a grade of 60 during the preliminary period. I was always present, I answered during recitation and in most of my activities I got high scores. I had other blockmates who had the same dilemma and could not understand what was happening. Come finals period, I knew I was still doomed and all I could do was pray. I ended up taking summer class for the first time. My parents told me not to chase after the prof and just accept it and go with the flow.

During second year, I was submerged into org life. I would go shoot and edit news reports of events around the campus after class. This was also the first time I applied for the Flame, but sadly I did not pass the interview. It was hard balancing org work with studies but at least I was learning outside the four walls of the classroom. Joining TOMCAT was the dream for all CA students, after all, but as the school year passed, I was burned out with org work and decided to lie low.

Third year was hell. TV prod made me realize that I really was not for production work and I eventually gave up my dream to be a director. We were all walking zombies from the shoots and late night editing but I decided to apply for the Flame again. I was finally accepted and I balanced covers with studies pretty well. I really, really enjoyed taking photos. This was when I realized that photography was the one thing I wanted to do for the rest of my life.

Second semester came and boy did it suck even more than the first, but at least I was distracted and occupied with coverages. I had an extra free day since our advertising prof never made it to class and always had an excuse not to come. He made us draft advertising plans we had no idea how to make since he never taught us.

That’s what taking up CA felt like for four years. It always felt like we were being thrown into a sea without any life vests or lifesavers. We had to learn everything by ourselves. We had to grope around in the dark to figure out if all the campaigns and plans we were doing were right. I guess some professors in the Communication Arts program still have to figure out the difference between spoonfeeding and teaching.

Throughout my four-year stay in UST, the most important thing I learned was to swim and stay afloat.

Anyway, I would like to take this opportunity to thank the wonderful people who have helped me survive college.

I would like to thank the first person I ever talked to when I entered college for being there for me until the end. For being our class president and “mommy” for three years. For sticking it out with me through our thesis which we crammed till the very end. For not fighting or giving up on me for four years. Gem, we did it! Cheers to the next chapter of our lives!

To my ‘Flamily’ who accepted me and made me feel at home right away, thank you! To my former editors, Ate Jani, Kuya Angel and the rest of the elders, thank you for being remarkable leaders! To my co-editors and EB, we survived and made four babies. I will miss you guys so much! And to the future editors, don’t let us down and keep the flame burning!

To my real family, thank you for supporting me all throughout. For letting me choose what I want to do and not pressuring me too much. For providing me with everything that I need. Thank you! And lastly, to my Nanay, I made it! I know how much you wanted to attend my graduation but it’s okay because I know you’ll be watching from up there! I miss you every single day but I am better and stronger because of you. F