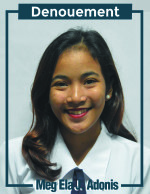 I’d like to think I relate to Rachel Watson, the protagonist in Paula Hawkins’ The Girl on the Train, on a certain level. In the novel, Rachel creates her own story of a couple she sees every day who lives just a few houses down her old home.

In the same way, I weave stories of people I sit next to or across from in jeepneys or LRTs: the woman in a turquoise shirt frowning at her cellphone might have just received a confusing text from her husband, the girl in her wrinkled school uniform staring blankly outside the train window might have just failed her Physics finals, and the tall man in a black suit with swollen eyes might have just gone to his mother’s funeral.

Whatever it may be, everyone has their own way of coping with a difficult situation.

For anyone wondering, here’s the story of the strange girl quietly observing commuters on her way home from school.

Seniors in my high school, St. Theresa’s College Quezon City, were required to enroll in different electives to supposedly prepare us for what awaits us in college.

We had to write down three choices during our final Guidance class, and mine were Creative Writing and Journalism (CWJ) because this was what I actually wanted; Basic Psychology because I heard there’s a certain meeting where all we would do—literally—was sleep during the entire 3-hour period; and Environmental Education because I still had the “environment savior” within me and I wanted to set pawikans free.

When the results were finally released and I got into CWJ, I could not forget the comment my father made, which is probably what journalism students are tired of hearing, “Wala namang pera diyan eh.”

It stung. It stung because I just wanted my family to support whatever choice I made for the future that was mine alone to unfold. It stung because it became one of my triggers during nights when I’d think if I actually made the right choice, and if I had a talent in writing.

I coped with it by still pushing through with journalism during the USTET even if we were surprisingly given the chance to change our future.

Back then, I had no idea there was a consequence for choosing passion over money. During my first two years, I couldn’t help but regret my decision while I was trying to study communication theories and figure out how I could possibly write 500-word news articles without adequate training.

Before I could even confirm if this was really the career I wanted to pursue, I had to cope with another unexpected loss—the death of my father.

The change that came with his passing was something we all weren’t prepared for, and for an entire year, we were consumed with grief. For a while, I coped by not focusing on my studies because what use would it be if my father wasn’t there to see me excel in my academics? What good would it bring me if I were a Dean’s Lister and the man who raised me to be who I was back then wasn’t there to celebrate with us?

And, of course, I always regretted it. Every day, I was the girl who carelessly went home and rode jeepneys with blank eyes and a numb heart. I knew I could never get over losing someone I truly loved with my entire heart, but I knew I had to move forward eventually.

I decided to turn my grief into passion. I joined the Flame during the beginning of my second year in college with still a hint of doubt if I could survive in the field.

The Letters section was something quite different from what I was studying. Instead of writing straight news articles, I was creating a world of my own through poetry and fiction, and I was even critiquing plays, books, and music albums.

Although crafting new worlds through literary pieces was a far cry from writing stories about a world that already existed, I realized that nothing is more important than harnessing what I was truly good at, instead of focusing on what pursuing what I really wanted in the first place meant to the people around me.

Even during my short stay at INQUIRER.net as an intern, I learned the value of choosing passion over anything else. While I was covering the 2016 Pride March, phone in one hand and a fan in the other, I realized that the adrenaline of writing in a country plagued with controversy was what kept me going.

I will always be thankful to the friends I made during my stay at the Flame because they always pushed me to improve on a talent I never actually believed had.

To my co-titas Gaea and Marla, thank you for making my last year in this publication worthwhile through our tiring (yet fulfilling) duties and chikas in between; Janine, thank you for being our human karaoke and our primary source of laughter during presswork; to our alumni and staffers, thank you for letting me grow in the realest way possible.

To Reg, Max, Kat, Pam, Kev, and Tash, I will always be grateful for all the memories we shared in our second homes (i.e. Reg’s dorm and Kev’s townhouse), from warm tears to uncontrollable laughter; 4JRN2, thank you for making my college life bearable through the inside jokes I’ll laugh at even until our first reunion; Jules, thank you for always believing in me even when I no longer believed in myself.

I owe my deepest gratitude to my family, who witnessed all the grief I had to go through and still supported me wherever I went.

This is my denouement, the final part of my life as a student.