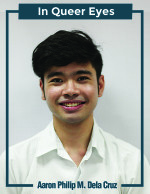 To diffuse the power of the author, to dismember texts with incursions and applications of criticism, in Literature, we were trained to unbridle our intellect and infuse it with the spirit of action in the form of praxis. In praxis, one is called to move. Untangle. Unchain. Slice through. And sometimes, even, to explode decrepit oppressive systems where feminists and my queer kinsfolk undo gender, where class systems are rattled by active-activist movements, and where the pluralistic Orient is given the chance to gaze back at the imperial West.

Literature has the power to save us. Dr. Jose Rizal’s Noli Me Tangere and El Filibusterismo once did by serving as the catalyst to incite the Filipino people to action. The warm light of language will guide us out of Plato’s cave. Yet there are those who exploit Literature for the sake of their selfish diabologies. Recall Hitler’s Mein Kampf which acted as the dynamo of and for the Nazi ideology. Narratives from competing forces come and clash together creating a tangled web of contrasting realities—alternative universes-in-themselves enmeshing with the reality we are living that it may estrange us from the truth.

The rise to power of today’s world leaders who build borders and walls to keep us from forming assemblies, the same people—Neo-Hitlers—who want us to murder each other for the sake of attaining their delusional ideas of peace, has created societies of hate and confusion, where like a needle in the haystack, truth and prosperity is buried in their misleading ideologies. We wake to find ourselves living in a post-truth era, referring not to a situation where the truth itself has finally disintegrated, but instead at a time, our present time, where narratives of truth are mixed up with the cesspool of fake news, Senator Sotto’s ignorant comments, and realities conjured by cognitive dissonances.

The post-truth era brings forth a dark miasma that summons evil dictators to rise from the dead, allowing them once more to shamble in this earth and colonize our peoples’ hearts and minds in order to infect and turn them as his disciples of hate. Akin to a computer virus, Mocha Uson is one such disciple who has broken into the netnographic landscape of social media where she has exploited communication technology as a means of misinformation transportation. Tainted truths are now more dangerously accessible.

The stories we choose to believe do not only define us, they also define our nation. As Mary Douglas once said it, our bodies are a synecdoche of our nation—the great loom of extant stories concomitantly weaves both domains into becoming. Now, more than ever, we must be vigilant. Exercise critical thinking in choosing the narratives we choose to follow. Remember the many hands and voices, our heroes, who fought with their life to redeem our country from the colonizers and the tyrannical dictator. Go out and walk with the people, raising our fists as we march and call for justice towards the cessation of many forms of violence. The grip of neocolonial and capitalist neoliberal ideological enterprises are entrenched in the limns of our–as what my classmate Harvey Castillo would say—body-nation. It has long poisoned the system. We need to spit out the polluted narratives they try to feed us. Spit out, not bite. Learn not to bite the hands of those who shove these pollutions down our throat. There is no need to become like the many violent powers we try to resist. Borrowing from Luce Irigaray, there is no need for more blood to remind us there’s a wound.

I thank the power of Literature which has roused me to fight for the rights of the LGBT community—who I believe are equally deserving to partake and feel safe in our beloved nation. I am indebted to its powers for allowing me to understand even at least a little of the lives of people who are living with HIV and AIDS, and the oppressive logos that label them as others in our community. Above all, I thank my parents, Jocelyn and Felicisimo dela Cruz, who lovingly allowed me not simply to choose my own narrative, but to write it. And now, I invite you, write yours. F