PHILIPPINE CULTURE has undergone monumental changes that have shaped it into what it is today. However, as time passes by, the ways of our ancestors are slowly being forgotten—but this is not the case for young Filipino artist Taipan Lucero.

Through his solo exhibit titled “CalligraFilipino I: Baybayin Illumination,” Lucero highlights his advocacy of strengthening the Filipino identity. In this exhibit, he showcases his self-developed Baybayin calligraphy that came to life mostly through acrylic on canvas.

Baybayin is one of the country’s pre-colonial writing systems that was used primarily by the Tagalog people. It is among the writing systems in the Philippines that has gone through a resurgence. Hence, more than just sharing his artworks through this exhibit, Lucero hopes to show viewers that Philippine culture is something to be proud of. 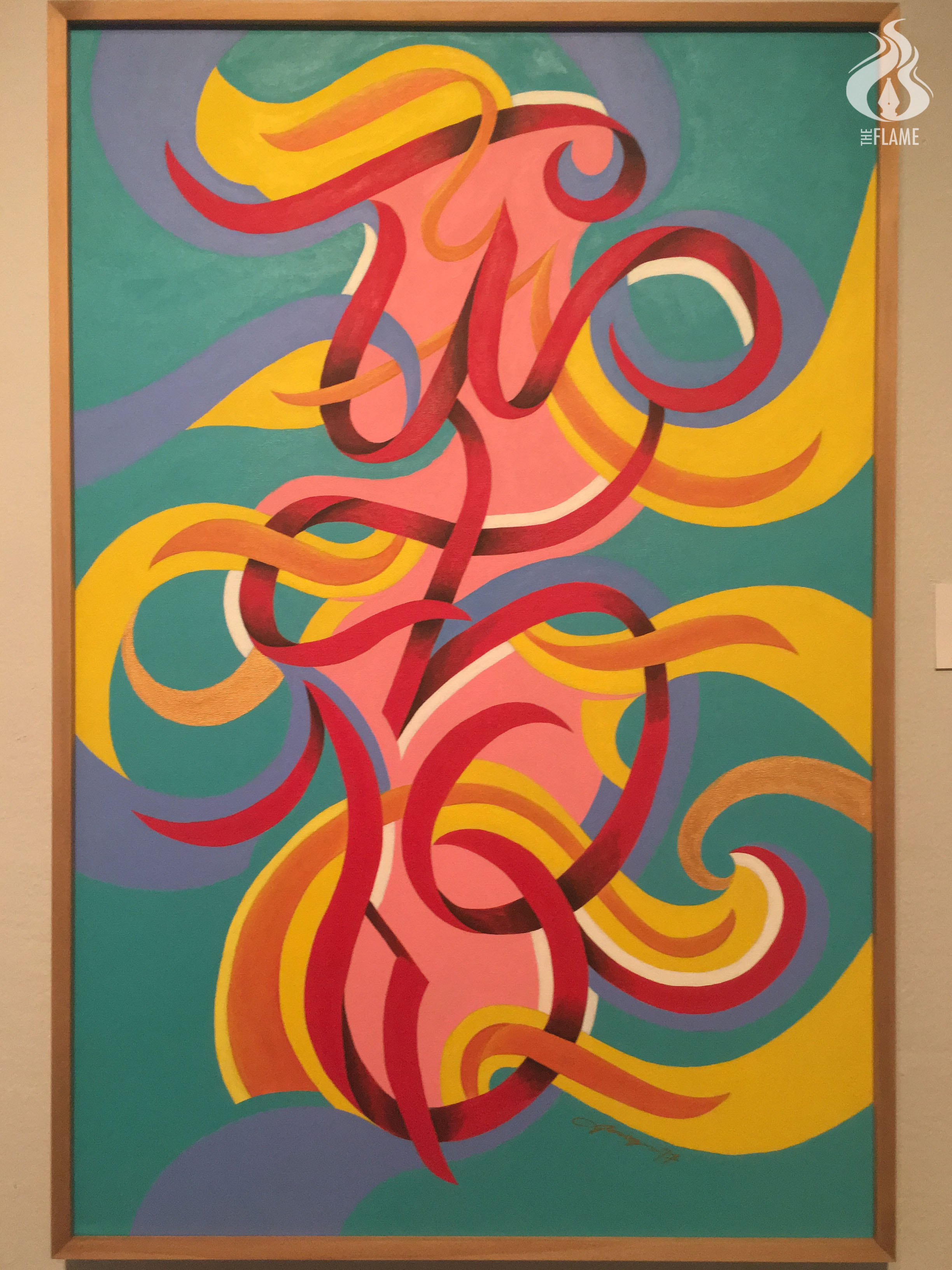 “Ilaw” (light) is the only brightly-colored piece on display. This was inspired by the honorific title Filipinos give to their mothers: “ilaw ng tahanan” (the light of the home). The piece, painted with warm and bright colors, conjures up images of a well-kept home filled with laughter, warmth, and love. The Maranao people’s Okir, a colorful curvilinear pattern used as decorative accents for houses, was also one of the inspirations in the piece’s creation. 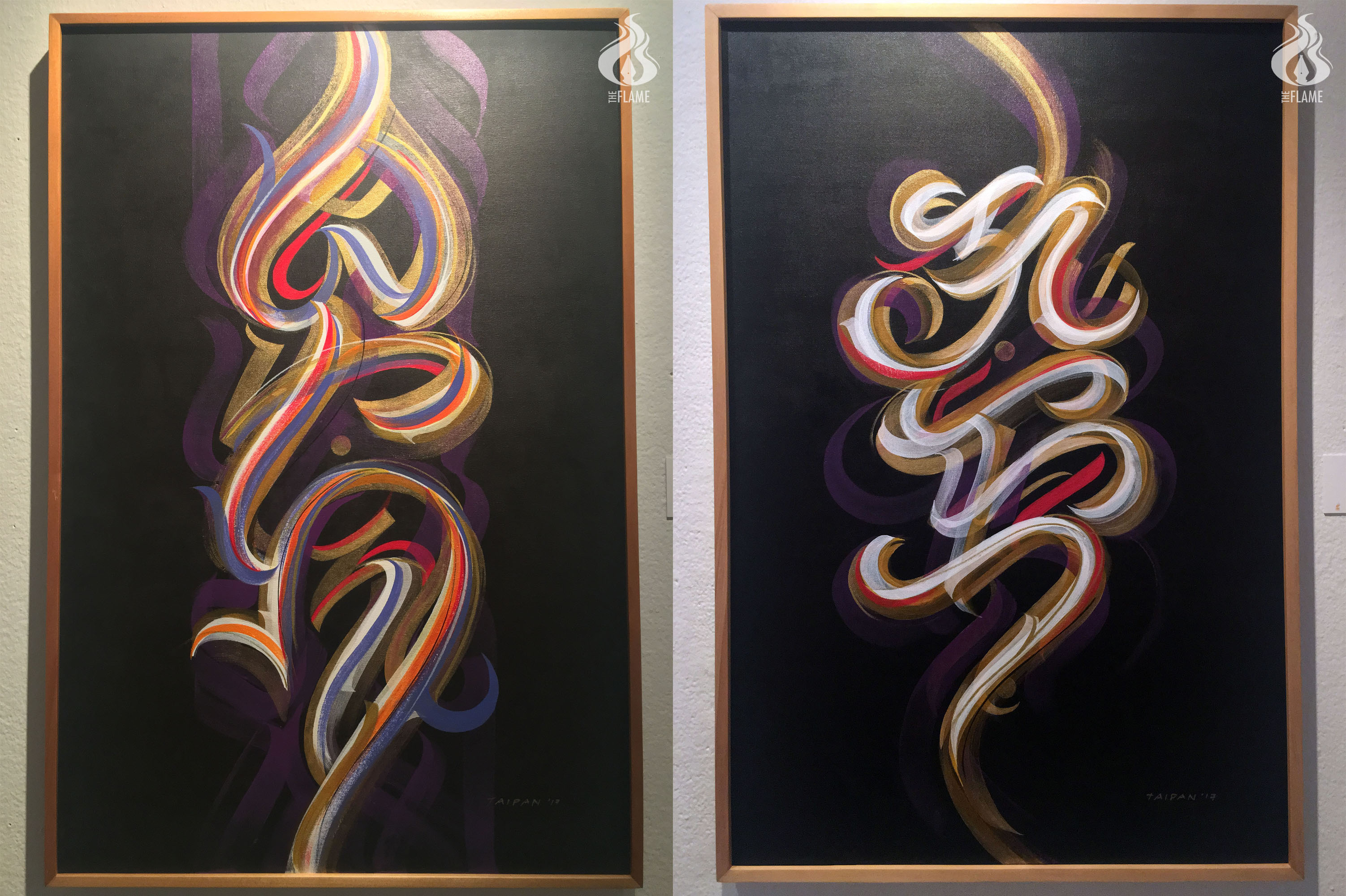 There is also a twin artwork called “Bayani” (hero) and “Guro” (teacher), which serves as a tribute to Lucero’s mother, a professor at the University of the Philippines Diliman. A teacher, for Lucero, is both a hero and a royalty. In these pieces, he utilized the colors red, purple, and gold to express royalty, power, and wisdom. 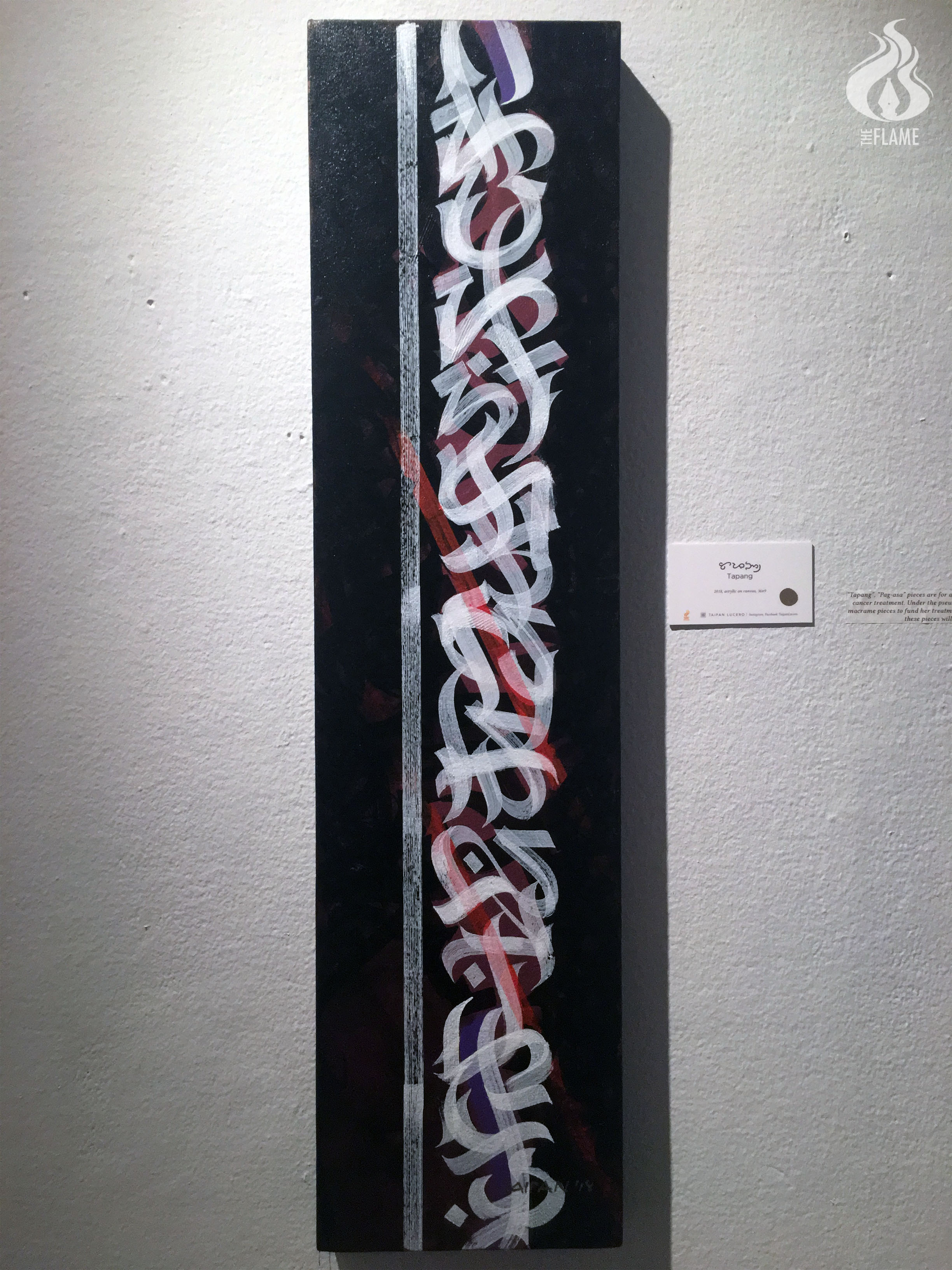 In his artwork “Tapang,” Lucero emphasized a dark red between two opposing colors, black and white, that makes viewers think of someone who is not afraid to stand out and be bold in an otherwise gray and dreary world.

Another one of Lucero’s most prominent works is a calligraphy of the word “tagumpay” (victory) painted in gold. Inspired by pre-colonial intricate rope jewelry, Lucero uses this artwork to showcase the rich tradition of our ancestors. It symbolizes his advocacy of promoting Filipino culture and how it has reached new heights thanks to different acknowledgments.

While Baybayin is an integral part of the country’s cultural identity, it has become a challenge to introduce it to Filipinos in an increasingly fast-paced world. Lucero aspires to present similar Baybayin art exhibitions in the future with the hope of increasing the knowledge, insights, and understanding of Filipinos of their own culture. F ANGELA A. CHUA

CalligraFilipino I: Baybayin Illumination is on display until today, August 31, at the NCCA Gallery located at 633 Gen Luna St. Intramuros, Manila