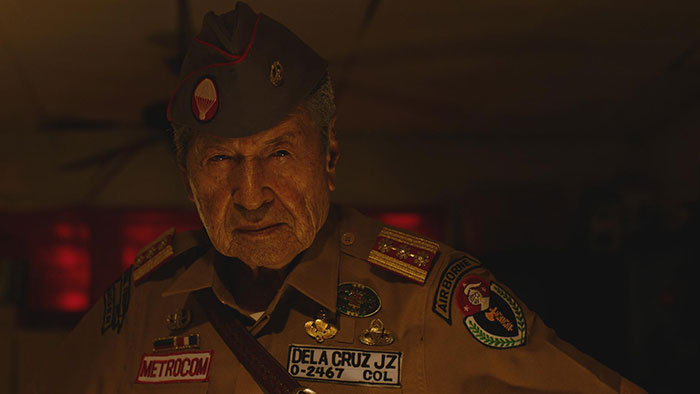 TIME has taught people that the history of the Philippines is written with blood. Ever since colonial masters invaded the land, natives have taken up arms to try and defend it. All of this is written in the pages of history books and is widely accepted. However, injustices and atrocities to human rights that happened during the years of martial law are always being questioned by those who did not experience the regime of the wicked dictator. Some of these cynics decide to traipse upon the dark past of the country to uncover the truth—only to find out that, like so many others, they entered the void with no way to return.

Directed by Benedict Mique Jr., ML is an entry to this year’s Cinemalaya film festival that tackles one of the country’s most atrocious political eras: martial law under the late dictator Ferdinand Marcos. The film tells the narrative of the era through the suffering of three college students who are tortured by Colonel (Eddie Garcia).

The story revolves around Carlo (Tony Labrasca), a millennial college student who is apathetic to the upheaval during martial law. Carlo’s stance on history is a product of the indifferent upbringing by his family, as they failed to scrutinize the injustices imposed by Marcos. Carlos’ crooked historical outlook is further fortified by his reliance on the internet and social media, which he uses to authenticate his beliefs.

One day, Carlo has to interview someone who lived through martial law for his homework. Along with his friends, he chanced upon Colonel Dela Cruz, a man who they used to play with as kids. Colonel, now a victim of senescence, has become weak. Carlo decides to interview the Colonel, but he is caught off-guard by a dismal surprise. Carlo and his friends then learn about what life was like in the martial law era firsthand through a truly unconventional and painful way.

The film is successful in creating a disturbing ambiance that will rattle the viewers. The concept of torture mixed with body horror—which is evident in scenes where Colonel mutilates the body parts of his victims—will stop the beating of the hearts of viewers. The film is also apt for the present time, considering that the Duterte administration’s actions are eerily reminiscent of what had happened during martial law.

ML is a reminder of why the masses must fight against the attempts of the government to disrespect human rights. Most of the film takes place inside the Colonel’s basement, which juxtaposes the torture houses where innocents were slaughtered. The overall dark mood of the film incites feelings of dread and repulsion—feelings that are capable of stirring up one’s insides.

The film utilizes Mique’s technique of reversal of roles. During the Marcos regime, the poor and the insurgents were the ones who were caught and tortured. However, in the film, middle-class teenagers who thought they would not get punished for avoiding political affairs were ultimately the ones who got subjected to the sadism of the Colonel.

The film causes feelings of pity and anguish to overcome the viewers, teaching them to learn how to empathize with the victims of martial law. Through ML, audiences may remember those who never had their taste of justice and vow to never forget the atrocities of the Marcoses. Ultimately, the film urges its viewers to never allow these atrocities to happen again in contemporary times. F