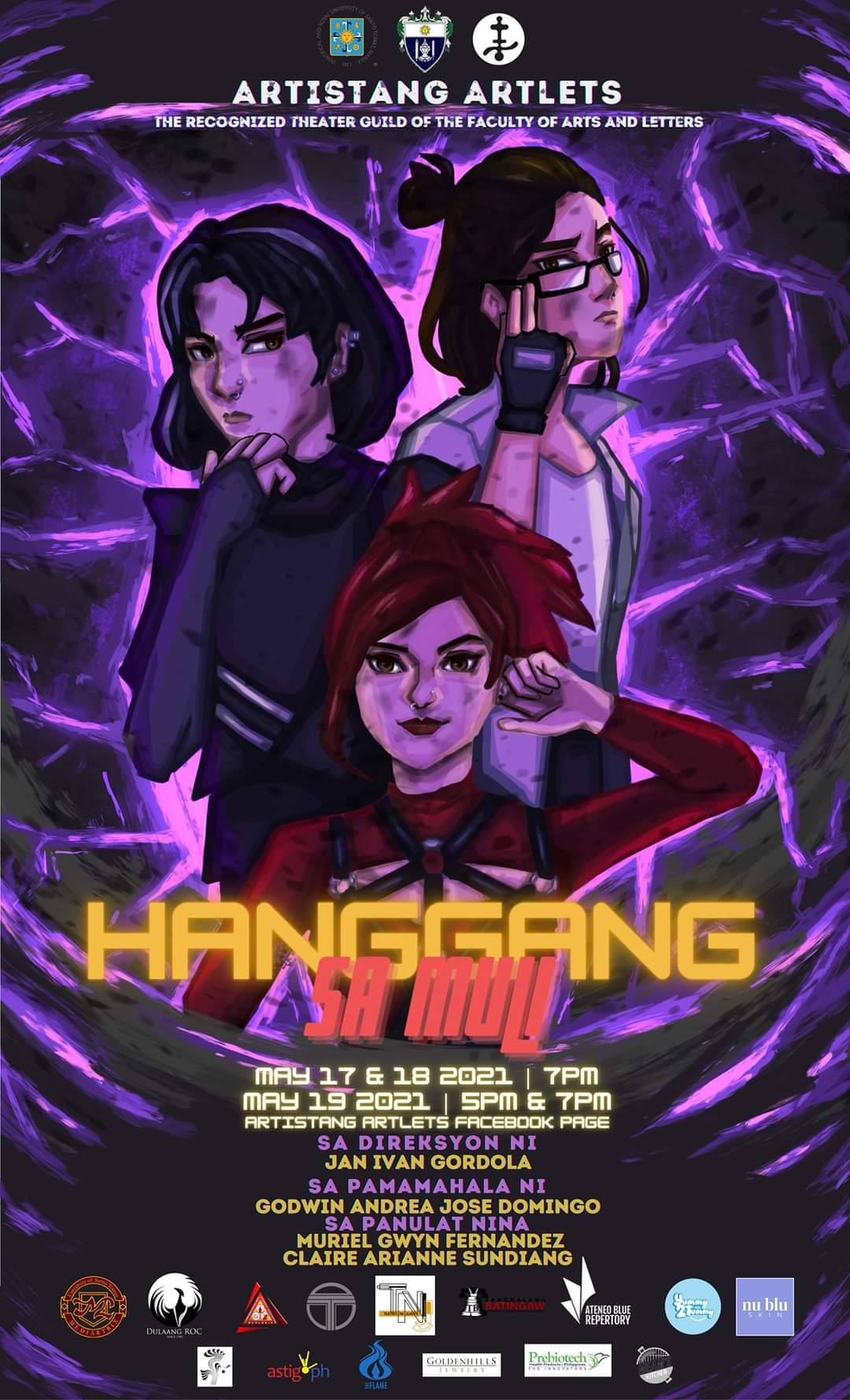 THE ILLNESSES of society can be the roots of appalling personal adversaries. Normally, when these problems attack, one would devise a counterblow. However, if the enemy possesses formidable strength, running away can be the only option.

Even building defenses may prove to be futile in the face of an extremely powerful foe: death. Nonetheless, the shields are upheld in disparate ways.

Hanggang Sa Muli, in its account of a world about to reach its expiration, exhibits the defenses set by a group of friends as they escape into a video game. As a major production directed by Jan Ivan Gondola and written by Claire Arianne Sundiang and Muriel Gwyn Fernandez, Artistang Artlets sets a storyline of an imagined future while retaining relevance to the present.

While the world is said to be approaching its finale, Ace (Raven Arellano), Reg (Aaliyah Mauricio), and Denny (Christian Dominic Servidad) find themselves determined to clear an online game. As a team, they venture into combat to finish what they started long since.

At first, the game prompts mischievous but good-natured banter.  However, as they progress, the quips become sharper. They turn into personal clashes, more so as a long-standing conflict resurfaces. It becomes clearer that despite their maintained shields against thinking about the apocalypse, its inevitability builds a tension that threatens their friendship.

The play begins with a riveting exposition. People playing despite the alarming circumstances is enthralling, making one eager to progress into the entire story. Mainly, it prompts questions about the veracity of the apocalypse and the reasons behind it. Since the narrative ensues and remains within a game, the events beyond what the screen offers become intriguing.

Additionally, the existing friendship between the characters is elusive. With mostly harsh conversations that continuously escalate, it is difficult to find an established relationship. It also causes one to wonder about their past issues as a way to discover the connection between their current motives and actions.

However, as the play approaches its conclusion, the questions are either left unanswered or half-met with indistinct clues that obstruct concrete inferences.  The latter is the case for the distressing affairs outside the game. This deprives context for its viewers which can serve as a footing for total comprehension of the plot.

On the other hand, the foundation for their friendship remains a matter of uncertainty, leaving the audience puzzled. Nevertheless, the presented hints about the events within their world prove the significance of the technical aspects. The sounds and lighting, among other features, somehow give background by implying details beyond the characters’ limited viewpoint. Moreover, they offer complimentary appeal to encourage interest.

Furthermore, the play provides a compelling reason to be witnessed: the cast. The actors, with their firm grasp on the characters, are relatable as people with reasonable dilemmas. By their aptitude to portray authentic people, they are able to elicit empathy from the audience.

Despite having the narrative set at the end of the world, it remains relevant today. The present pandemic can be too terrorizing for some, hindering them from confronting its underlying issues. Instead of actively approaching problems, they turn to evading techniques. They seek various types of distractions and entertainment.

The enemy is not too different either. Although these people seem passive in solving social issues, it can also manifest in taking care of themselves first. In these desperate times, it is normal to direct one’s desperate measures towards protecting oneself.

The play demonstrates that bolstering defenses are not cowardly but reasonable. No one is expected to be fearless amid struggles; it is enough to be brave for oneself. More importantly, by running away from an invincible rival, one can find the opportunity to confront a different problem which may be easier to undertake, but not any less consequential. It becomes an occasion to resolve unresolved conflicts to sustain relationships.

Hanggang Sa Muli substantially imparts the key to resilience during trying times.  When afflicted, seeking security in fellowship is worthwhile; it can be where one discovers fortitude. In the end, the bond created with other people essentially builds strength, especially in the midst of distress. F