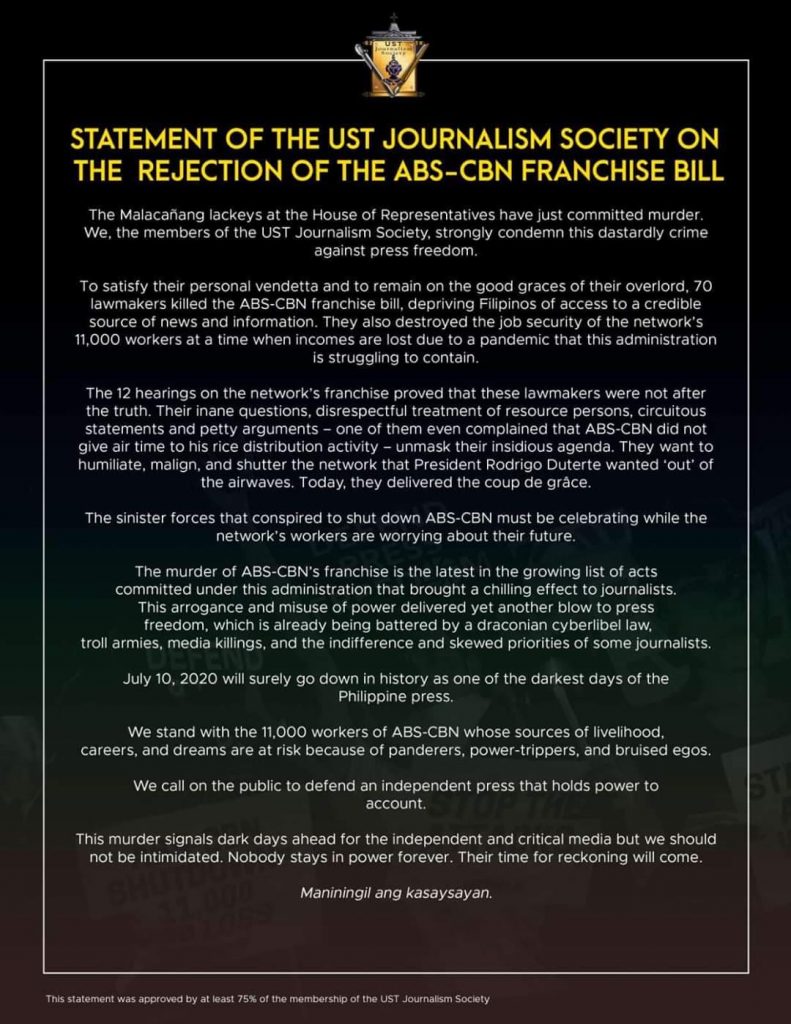 READ: Statement of the UST Journalism Society on the rejection of the ABS-CBN Franchise Bill

The UST Journalism Society (JournSoc) denounced on Saturday the franchise denial of the broadcast network ABS-CBN, saying it was one of the darkest days of the Philippine press.

“The 12 hearings on the network’s franchise proved that these lawmakers were not after truth. Their inane questions, disrespectful treatment of resource persons, circuitous statements, and petty arguments—one of them even complained that ABS-CBN did not give air time to his rice distribution activity—unmasked their insidious agenda,” Journsoc said in their statement.

The media giant officially ceased its operations on Friday, July 10, after lawmakers voted 70-11, rejecting the franchise application of ABS- CBN Corp., while two inhibited and one abstained.

The student organization said that the act “brought a chilling effect to the journalists” and only served the Congress’s personal vendetta.

“This arrogance and misuse of power delivered yet another blow to press freedom, which is already being battered by a draconian cyber libel law, troll armies, media killings, and the indifference and skewed priorities of some journalists,” they said.

They also mentioned that this move will deprive the Filipinos of an accessible and credible source of information and put the 11,000 workers’ source of income at risk in the middle of a pandemic.

Journsoc also said that the government’s order to shut down the media giant is a way to “humiliate, malign, and shutter the network that President Duterte wanted ‘out’ of the airwaves”.

Since 2017, President Duterte has long been vocal of blocking the franchise renewal of ABS- CBN Corp. as he accused them of biased reporting and taking advertising money without airing his political ads during the 2016 elections.

ABSC said that rejecting the franchise renewal of ABS-CBN during the public health and economic crisis proved that the Duterte regime is an “enemy of the democracy”, serving their own interests.F