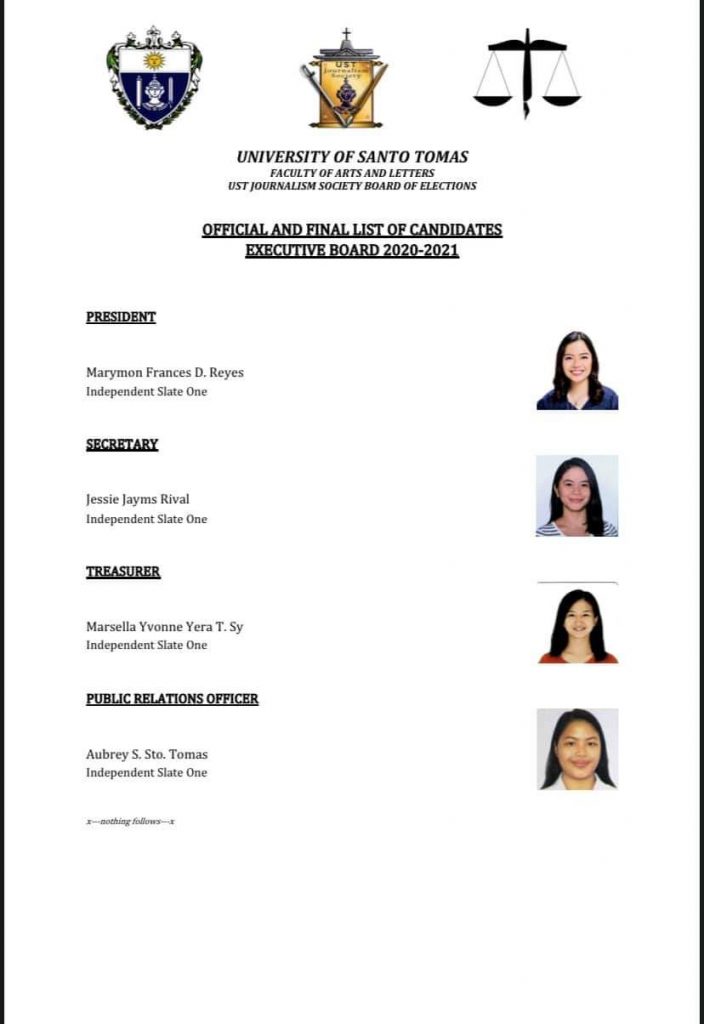 THE ELECTION for new Executive Board (EB) members of the UST Journalism Society would push through despite the shift to online platforms due to the coronavirus pandemic, the JournSoc’s Board of Elections (BOE) announced on Nov. 10.

Four sophomore students are vying for top positions this year.

Marymon Frances Reyes, anchor for the UST Tiger TV and former production committee member of JournSoc, is running for president, with “creating change in preparation for the future” through student security and inclusivity on decision-making processes as her platform.

Marsella Yvonne Yera Sy, former executive associate to the treasurer of JournSoc, is running for treasurer, focusing on delivering security by means of transparency to create an environment where financial concerns are heard and addressed.

Aubrey Sto. Tomas is eyeing the PRO post, setting to strengthen the communication between students and JournSoc by utilizing digital platforms to make sure that no one will be left behind.

Challenges of JournSoc elections due to COVID-19

BOE chairperson Anna Lafuente highlighted the challenges they needed to face in order to push through the 2020 elections.

“The elections from the previous years compared with our current setup because of the pandemic is different. Before, we both had online and room-to-room campaigns, and as for the voting, we had representatives [to] facilitate each room on the day of voting, which usually happens in one to two days,” Lafuente said during a phone interview last Nov. 10.

“Due to [the] pandemic, we will only have one day and a specific time period for voting because it will be done through Google forms,” she added.

The JournSoc BOE chairperson shared that because of the limitations set by the COVID-19, these four candidates were the only ones to meet the qualifications and who submitted all the needed requirements within the filing period.

“[But] being the only candidates to run for these positions does not guarantee that they will take office,” she told The Flame

Lafuente emphasized that the candidates must reach at least 51 percent of 339 votes from the registered JournSoc members to be declared as winners.

Outgoing JournSoc president Loreta Arroyo expected the candidates to embrace student-inclusivity, which she empowered during her term.

“When you hear the word Society or Council, there’s this feeling na dapat hindi mo sila bastusin in which we really tore down. We are just students who are willingly here to serve you. We are not any higher than you, pantay-pantay tayong lahat,” Arroyo said in an online interview last Nov. 10.

She mentioned that this pandemic limits the term-length and resources in organizing various activities for journalism students, and it would challenge them.

“Ang term nila will start in November and will end according to the OSA (Office of Student Affairs) in May. Ang challenge doon is how to maximize their [term] as an executive board given the short amount of time. [They] cannot conduct face-to-face activities, paano nila kukunin yung attention ng journ students?” she told The Flame.

Arroyo also noted that they would be active in releasing statements supporting media issues. She feared, however, the potential attacks on them that come with this move.

“What I see from them is women of empowerment, women of love, [and] women of encouragement. I am not saying that they are weak, [but] I just fear na baka atakihin sila, [and] I do not wish for them to be attacked kasi [they] are just students voicing [their] opinions based on facts,” she said.

The campaign period will run from Nov. 11 to Nov. 14 while the election will be held on Nov. 16. The winners will be proclaimed on Nov. 17.F