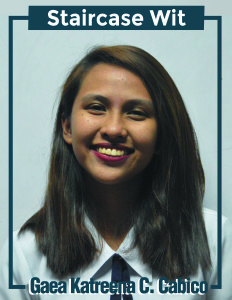 Saying the word makes me anxious. Seven months from now, I will leave the halls of St. Raymund de Peñafort Building hoping that whatever I learned in college will lead me somewhere.

I am one of the many who had to leave home and move to the city because our parents thought that studying in the Pontifical and Royal University of Santo Tomas would ensure us quality education and render us employable.

My stay in the Faculty of Arts and Letters (AB) is significant as it is an integral part of my becoming. But as the first semester of my last year in college draws near to its close, I start to evaluate things.

Truth be told, I do not think the education I am receiving meets my expectations.

While the Faculty boasts the improvements in the system and the awards and recognitions it has acquired throughout the years, Artlets often feel that they are not getting their money’s worth mainly because of the flaws in the curriculum, and professors who lack expertise and motivation on the subjects they are teaching.

The last factor greatly contributed to my increasing dissatisfaction towards my college education. There are professors who always come in late, and do not attend classes at all, probably because they have more important commitments and the welfare of the students is just secondary.

Some professors have the inability to express ideas well, and their approach is to give students the materials and let them study on their own. Others fail to instill social awareness among their students. Unfortunately, having high-ranking positions in the University and PhDs attached to their names do not equate to being effective teachers.

In my years as a Journalism student, I have learned that studying the craft requires learning outside the classroom where “What’s the banner story?” has always been a staple. Knowing Galtung and Ruge’s news values and the concept of inverted pyramid is simply not enough.

I remember spending two semesters doing essays, looking for the meanings of euphemisms and foreign words, and consuming the entire period discussing the latest news when we were supposed to learn how to write a basic news story. Third year came but some of my blockmates had difficulty finding an interesting angle and writing a news story because we barely had news writing exercises and received feedback from our professor.

Yes, college does not teach everything; it only prepares us for the world after graduation, or so it seems. Professors may crack the door but we have to push it open.

But, my dear professors, remember that you hold a crucial role in producing Artlets who will soon be part of the nation’s becoming. What the Faculty needs is your continuous effort and undying dedication to uphold the excellence AB is known for.

Please acknowledge your flaws, be more open to criticisms, and do something about them. Do not let yourself be the prime characters of the hushed whispers and laments passed on from one batch to another.

Prove to us that the Faculty is more than accreditations and Centers of Development and Excellence status; show us what glory and pride really mean.

I do not want to end this column without recognizing the great professors this University has. I would like to refer to my favorite professors as my guide maps—my role models. Because of dedicated people like them, I have this dream to become a professor and return to AB someday. I vow to provide my future students the quality education they deserve.

But for now, the least I can do is to survive my last year as a graduating student and be less anxious about the future. F

For comments and feedback, you may email the author at gaeacabico.theflame@gmail.com.