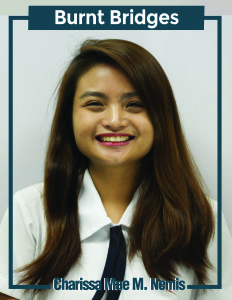 IS IT still good to “be real” if the “real” you is bitter and hateful?

In a video that went viral online, former Miss Earth-Philippines 2016 Imelda Schweighart could be seen letting go of her “true self” as she hung around her fans in the backstage after the pageant.

In the video, she was caught saying, “’Yung nanalo peke ilong, peke baba, peke boobs. Miss Earth dapat natural ‘di ba?” Apparently, Schweighart, who did not even make it to the pageant’s top 16, was talking about Miss Earth 2016 Katherine Espin of Ecuador.

The small crowd cheered her on, unalarmed by the fact that our country was being represented by a disgraceful sore loser saved by her looks.

Sour grape is perhaps typical to us Filipinos. Millions cried for a recount when Bongbong Marcos lost the vice-presidential race, claiming the Liberal party cheated; supporters demanded a rematch between Manny Pacquiao and Floyd Mayweather Jr., blaming the loss of the so-called ‘Filipino pride’ to his injury and the bias of the judges; and just recently, some of us had the audacity to back Schweighart in insulting the Miss Earth 2016 winner, instead of accepting that our bet just did not have what it takes.

Schweighart resigned after being subject to threats and online bashing, and said: “If it’s a crime to tell the truth, I’m sorry.” Though her resignation was reportedly her mother’s decision, the unapologetic beauty queen blamed whoever posted the video online for the backlash she has received instead of owning up to her bad behavior and realizing that her lack of sportsmanship reflected her country.

Also, when Schweighart was asked about the lesson the experience taught her, she admitted that she did not know she has been wrong all this time—not minding that if the cost of “being real” is bringing shame to your country and hurting others, then it is not worth it.

The only criticisms that matter are constructive ones. Schweighart’s offensive comments, which Espin denied, were results of fatigue and hurt. I understand that it is human nature to say cruel words during our worst moments, but we have to stop normalizing the habit of comforting ourselves by tearing other people down.

Even if Espin had gone under the needle, it would not have meant that she is less beautiful than the other candidates. To assert that Espin does not deserve the crown just because she was not born with certain physical attributes would be to reduce her to her looks—which, like everybody else, is not all that she is.

“You don’t have to be careful with what you’re saying. You have to be real because that’s what people need,” Schweighart said in an interview, but that is not true.

The last thing we need is a beauty queen, a representative of our country, and supposedly a role model for the youth, who, out of bitterness, would unrepentantly speak ill of a fellow woman to make herself feel better.

Reality is already filled with too much hate, especially against women who are often objectified and enslaved by unrealistic standards. A woman has to be flawless to be considered beautiful, but if one makes even the slightest effort to be so, she is dubbed “fake” and “unnatural.”

It is time to stop romanticizing brutal honesty for the sake of “keeping it real.” After all, sincerity and kindness are not mutually exclusive. F

For comments and feedback, you may email the author at  cnemis.theflame@gmail.com.