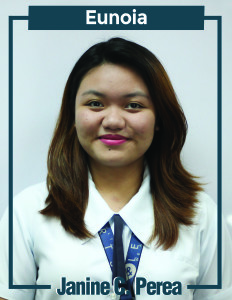 IN CASE you missed it, your ancestor is an ape. Evolution helped us to become more human and taught us to walk on two feet. Thankfully, evolution also took out all the excessive growth of body hair and made our brain more capable of thinking and adapting. Changes are not only evident with us, humans, but also, with the whole world, and over time, there is progress.

One thing that is still on the slow process of change is the mentality that men are superior to women. In history, men see women as second-class citizens which hindered them from getting fair treatment.

Up until now, we can still feel the inequality between the two sexes, but now is the best time to stop repeating history and start listening to “herstory.”

Just recently, a Twitter post went viral after it featured a series of screen captured images of a conversation among a group of college boys who were exchanging obscene remarks about a girl who was only in senior high school.

The girl was reportedly added into the nasty conversation, and she opted out of it, but the college boys kept on including her. After taking her case to social media, and both parties faced backlash, the post was taken down and the account that posted the conversation was deactivated.

The backlash that the victim faced was in the defense of the boys that harassed her. Some dismissed it as “boy talk” but I do not think that kind of topic is normal for boys to chat about. Regardless, the manner in which they exchanged obscene things and had the gall to have their victim witness it disgusted me.

I personally believe in equal rights for the sexes. However, what these boys did was pure crass, and I was slapped with the reality that some guys still do not pay respect to women.

I also cannot imagine how the mothers or sisters of these boys reacted upon seeing the post. The situation is very alarming especially that we are now at a new age.

However, we never heard the other side of the story. We just knew that the victim was harassed and the guys were publicly shamed as their names were not blurred out.

Likewise, these boys might have been subjected to all the bullying and harassment, too, and I think they both deserve the hate and the protection.

In this case, the one who posted the conversation is also at fault. Instead of taking it to social media, a personal settlement with the right authorities could have done a similar impact. At times like this, social media is a dangerous jungle, and often times, it is a complicated maze where once you go in, it will be hard for you to come out.

Women are not always weak and men are not always strong. We are both fragile and powerful. Both sexes have superiorities and inferiorities, one after another, but that does not make us any better or worse. If you do not believe in equality and respect, you may have forgotten to evolve at all. F

For comments and feedback, you may email the author at jcperea.theflame@gmail.com.