THE UNIVERSITY of the Philippines Vargas Museum opened its doors to “Tumba Tumba Children’s Museum of Philippine Art,” a proof-of-concept show by the Center for Art, New Ventures and Sustainable Development that put the spotlight on what life feels like for a child. It allowed visitors to be fully immersed in that experience by focusing on fun and interactive activities as well as paintings, mechanical devices, and sculptures that surely delighted the young and old alike. 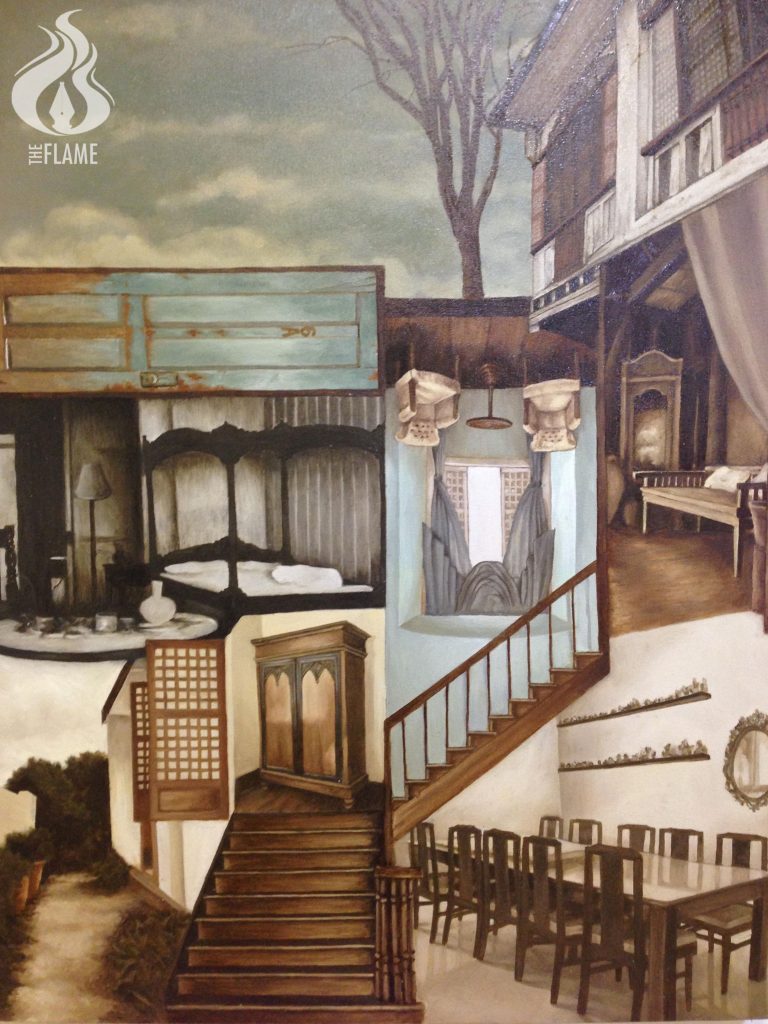 One of the interesting works of art is an untitled painting by Arvi Fetalvero that portrays a house with all its rooms depicted in an unusual manner. The rooms are jumbled up as if the house was designed by a child. One can see a small living room containing a staircase that passes through an upside-down lounge area and leads to a small room, which contains a small wardrobe as well as a staircase leading to a ten-seater dining table. Above the wardrobe is the bedroom and right above it is the door which is presumably the entrance to the house. Although the piece may be confusing and unconventional, it shows how imagination can play a role in any aspect of one’s life. 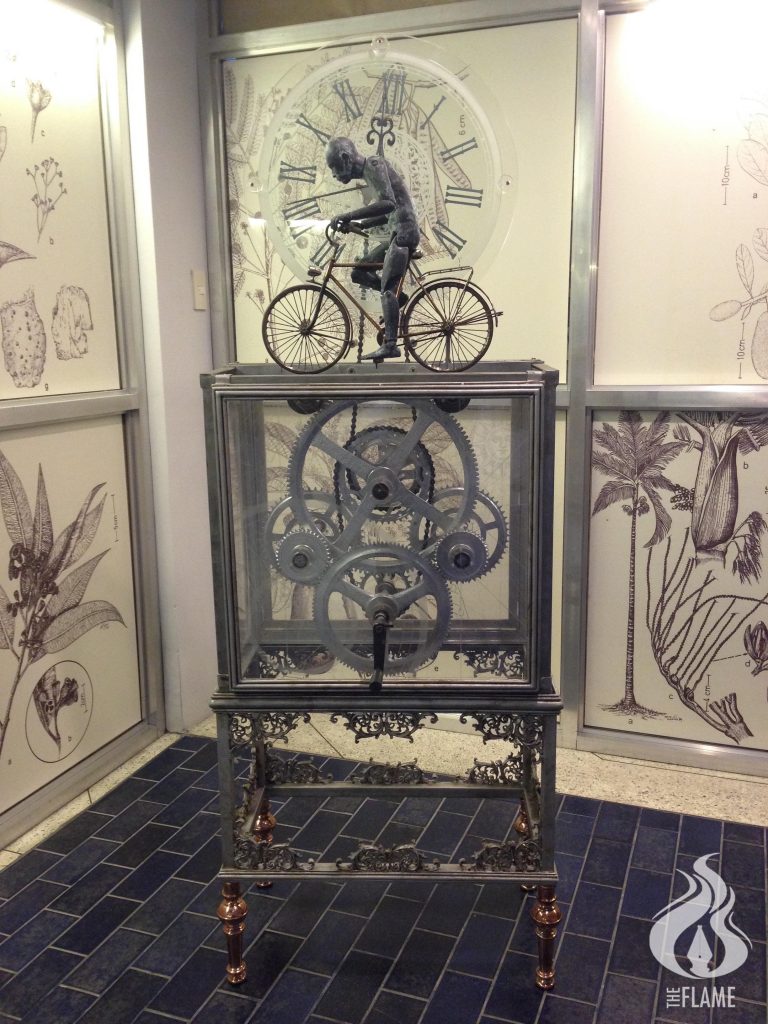 Daniel dela Cruz and Micah Alampay certainly outdid themselves with a mechanical device that was one of the exhibit’s top interactive crowd-pleasers. Their work, titled “The Longest Distance,” is made up of mixed metals that shows a man hunched over a bicycle. His figure is overpowered by a large glass clock that seems to be haunting him wherever he goes. Underneath the bicycle, there is a series of knobs and wheels that lead to a lever which controls the movement of the man and his bicycle. Viewers used this lever to make the entire device move and, in turn, help the man move along further in his journey. 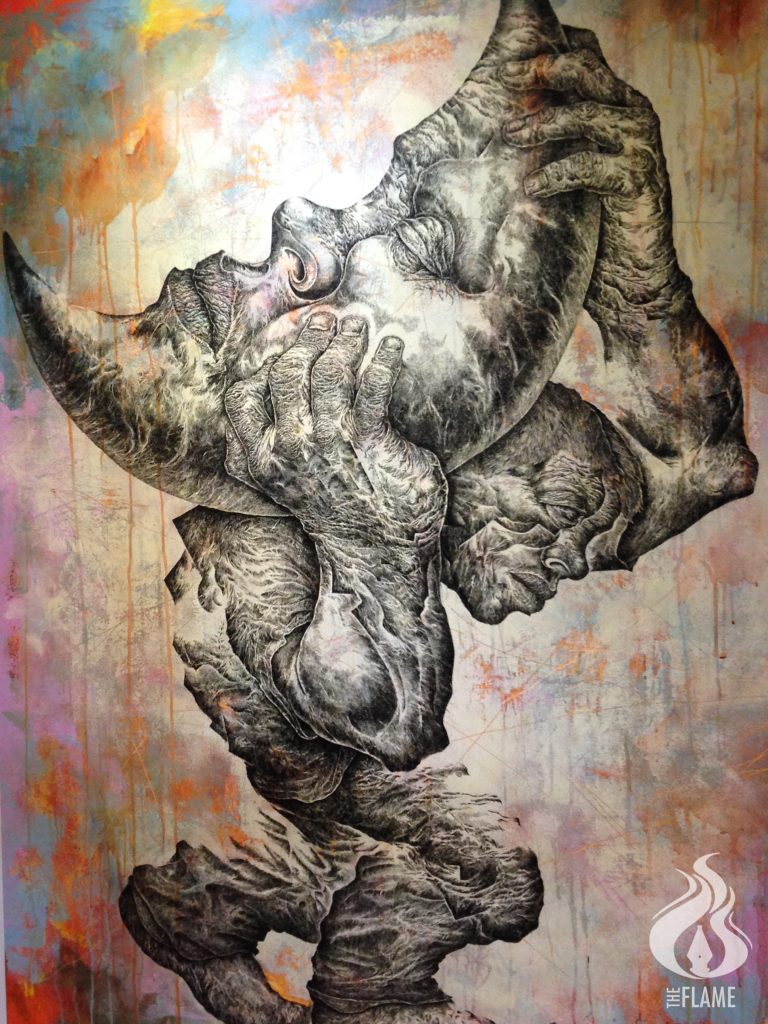 When people speak of art and what it must portray, they look for emotion or a story that one can delve into while being in the presence of such an artwork. This is exactly what Iggy Rodriguez’s untitled painting shows its viewers. A small person is seen struggling under the weight of an enormous sleeping moon. Although the person seems to have large and strong hands that are capable of lifting this moon, his pain and struggle are still evident. This piece leaves the viewer asking a variety of questions: “Why is he carrying the moon?” “Where is he taking it?” and “What is the story behind this man’s journey?” 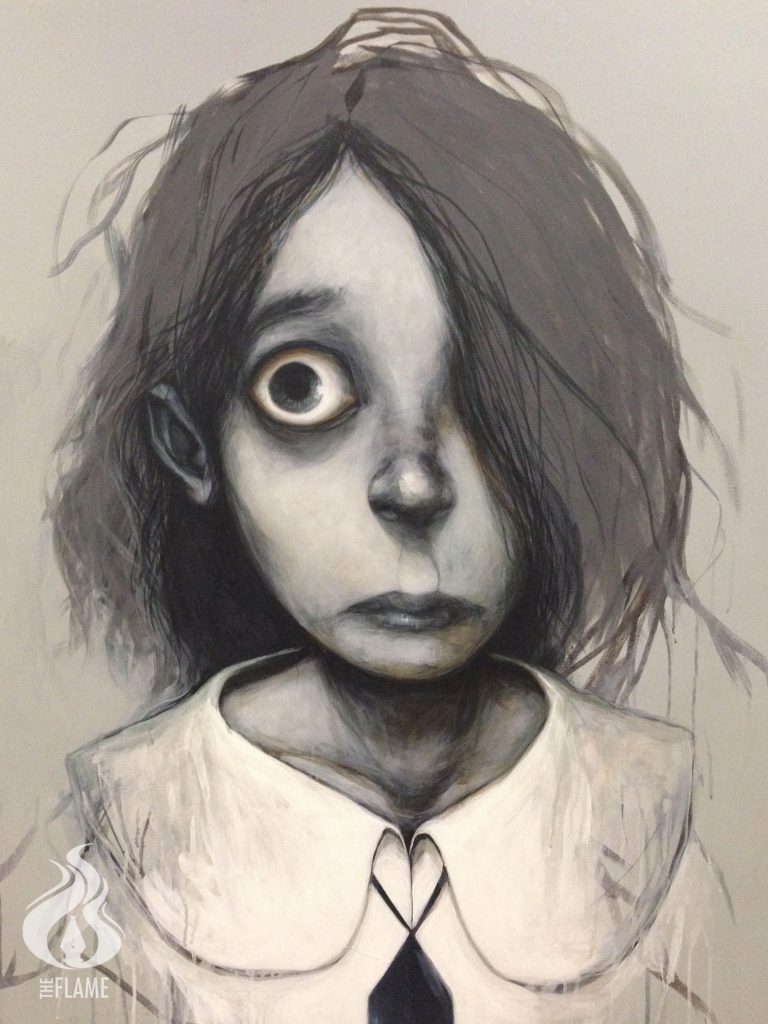 Not all childhoods are happy. One of the popular showpieces that was eagerly anticipated was the collection of untitled paintings and sculptures of Renato “Jojo” Barja Jr. His collection focused on children’s stories. One of the paintings portrays a young child wearing a school uniform– her eyes are wide, there are circles under her eyes, her hair is disheveled, and her uniform looks old and grimy. One might think that the work mirrors the reality that millions of children are deprived of their right to receive an education. 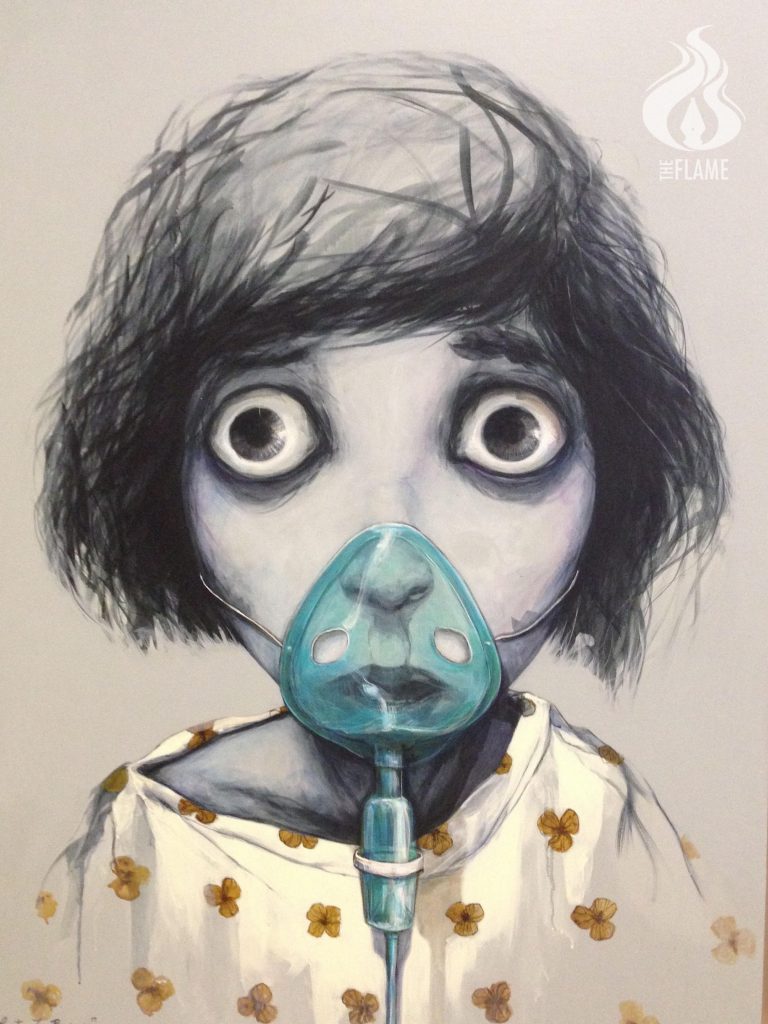 Barja alludes to another social issue with a piece that shows a child with very wide eyes, which are the trademark of all his paintings. The child has a terrified expression on her face while wearing an old hospital gown and an oxygen mask. It leads viewers to think about the health issues in the country.

While it is commendable to always strive to be mature, sometimes, it is also healthy to allow oneself to feel like a child at heart because there are so many beautiful things in store for those with simple and innocent souls. “Tumba Tumba” is a wonderful project that tackles the various problems being faced by children today. For sure, one left the show with a sense of fulfillment, many realizations, and a happy heart. F