AS STUDENTS scout for a place to silence their hungry stomachs, they might feel a bit dismal from all the run-of-the-mill fast-food meals that dominate the streets around UST. Peter You had decided to make a difference with his restaurant, Hanayo, by offering all kinds of Korean specialties.

Ten years ago, You was motivated by the sentiments of his children grown jaded from oily food such as fried chicken and hamburgers. With this, he wanted to create something that offered more than Western cuisine.

In the narrow street of Antonio in Sampaloc, Manila, Hanayo welcomed customers with picture after picture of famous South Korean pop stars framed on the walls of the restaurant, eliciting a sense of satisfaction with the neatness of the display. Additionally, upbeat music videos are being played softly on a large TV screen in the middle, crafting the place as every K-pop fan’s dream dining room even more. 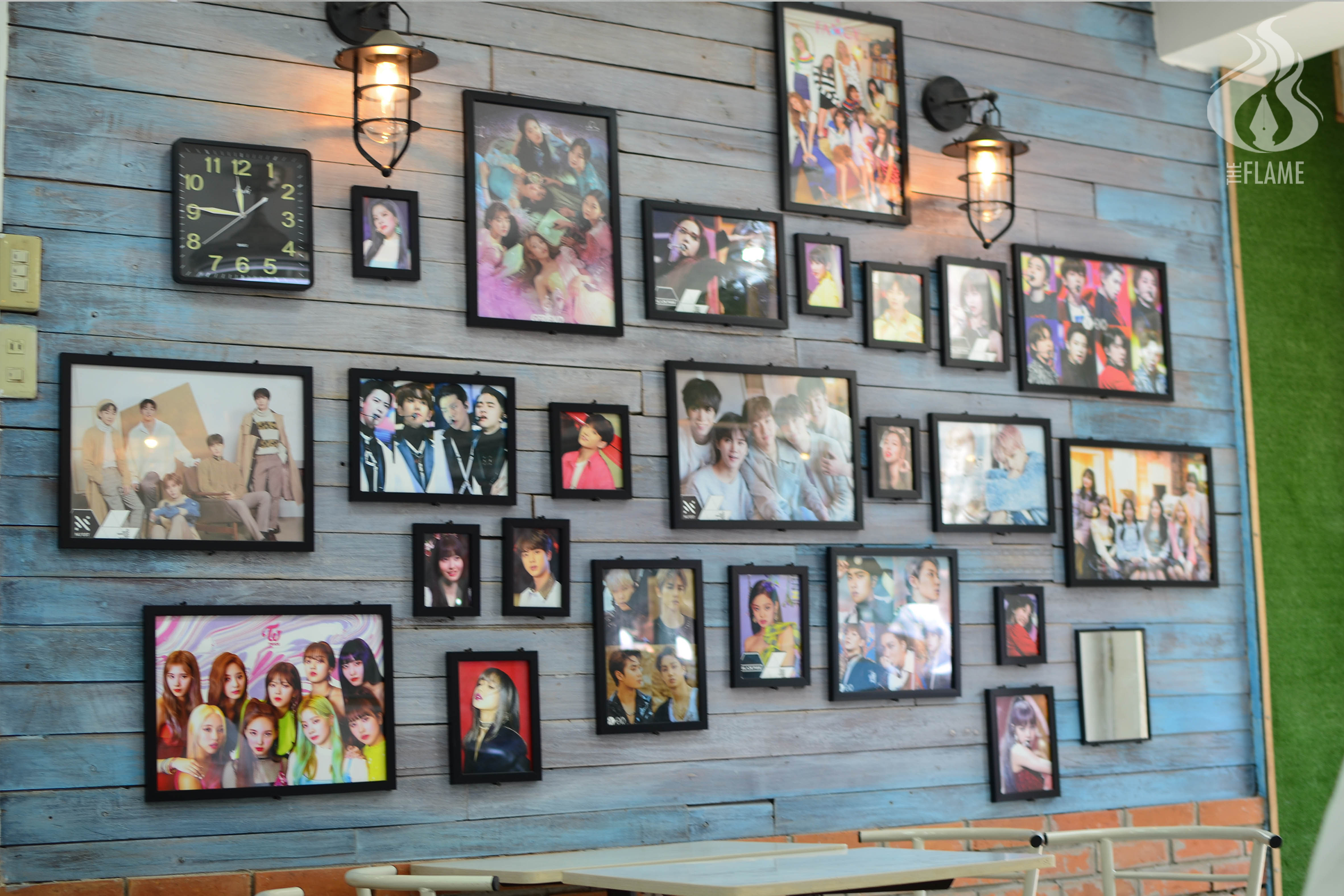 The restaurant’s ambiance is filled with a strong air of liveliness as sunlight filters brightly through its glass windows, making customers feel more energized in eating to their appetite’s delight.

Korean cuisine would not be complete without its acclaimed noodles, and Hanayo offered its very best with its spicy Ramyeon, served hot and aromatic to liven one’s stomach.

Mixed with egg and onion, the noodles are cooked to a soft, fluffy perfection that could easily gratify one’s tongue with slurping goodness. Its soup is packed with just the right amount of flavor that stays in one’s mouth and pinches it with savory spiciness. 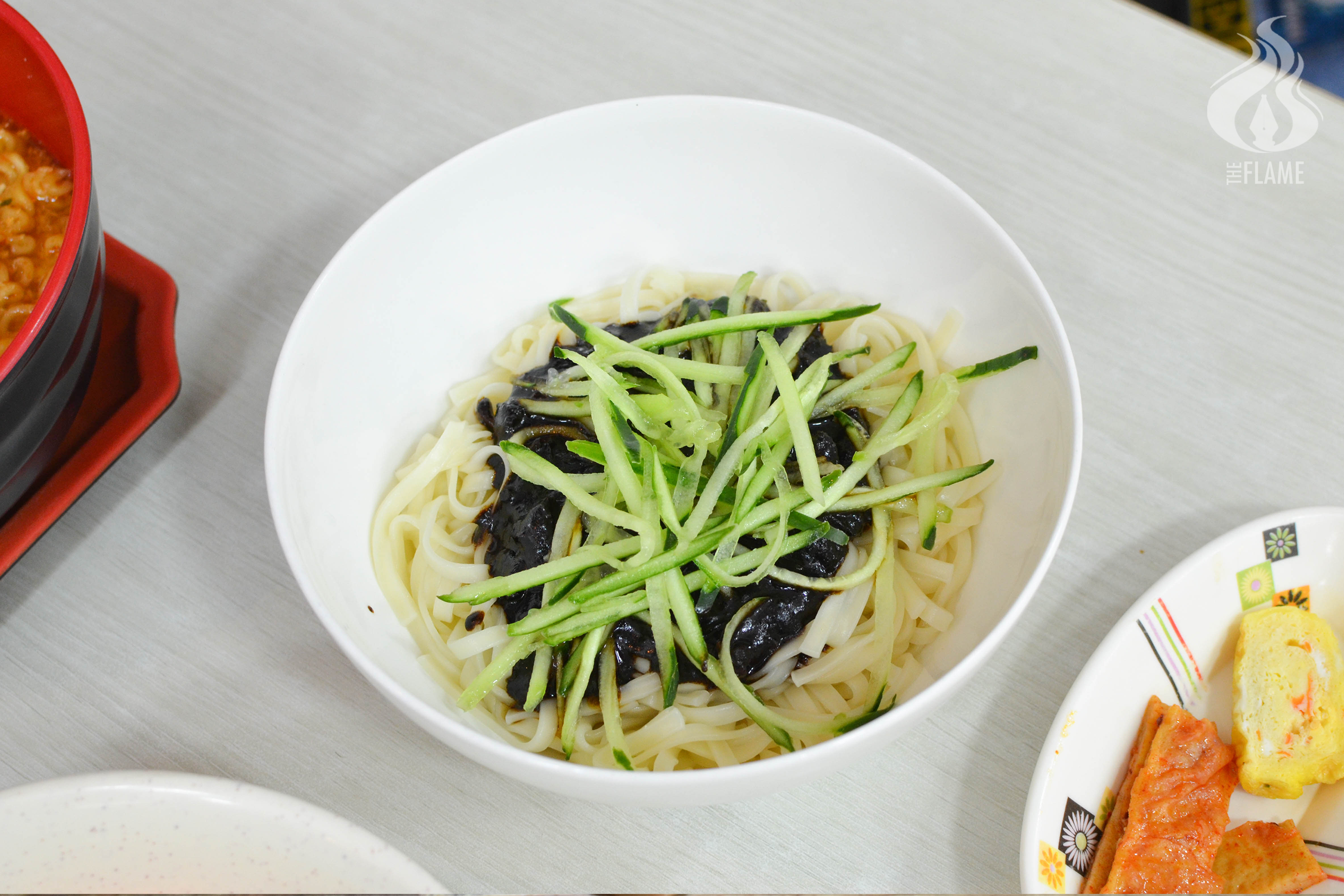 Craving seafood in the mix? Try Hanayo’s Jajang Myeon, a bowl of thick, chunky noodles topped with its special black bean sauce. In contrast to the vigorous spiciness of Ramyeon, the dish would hit the tongue with a subtle yet unrecognizable taste of squid, calming one’s mouth with a flavorful taste of the sea. The dish would be a stunner for healthy eaters because of its thin slices of cucumbers that are high in nutrients.

But noodles are just the tip of the iceberg in Hanayo’s wide selection of meals. 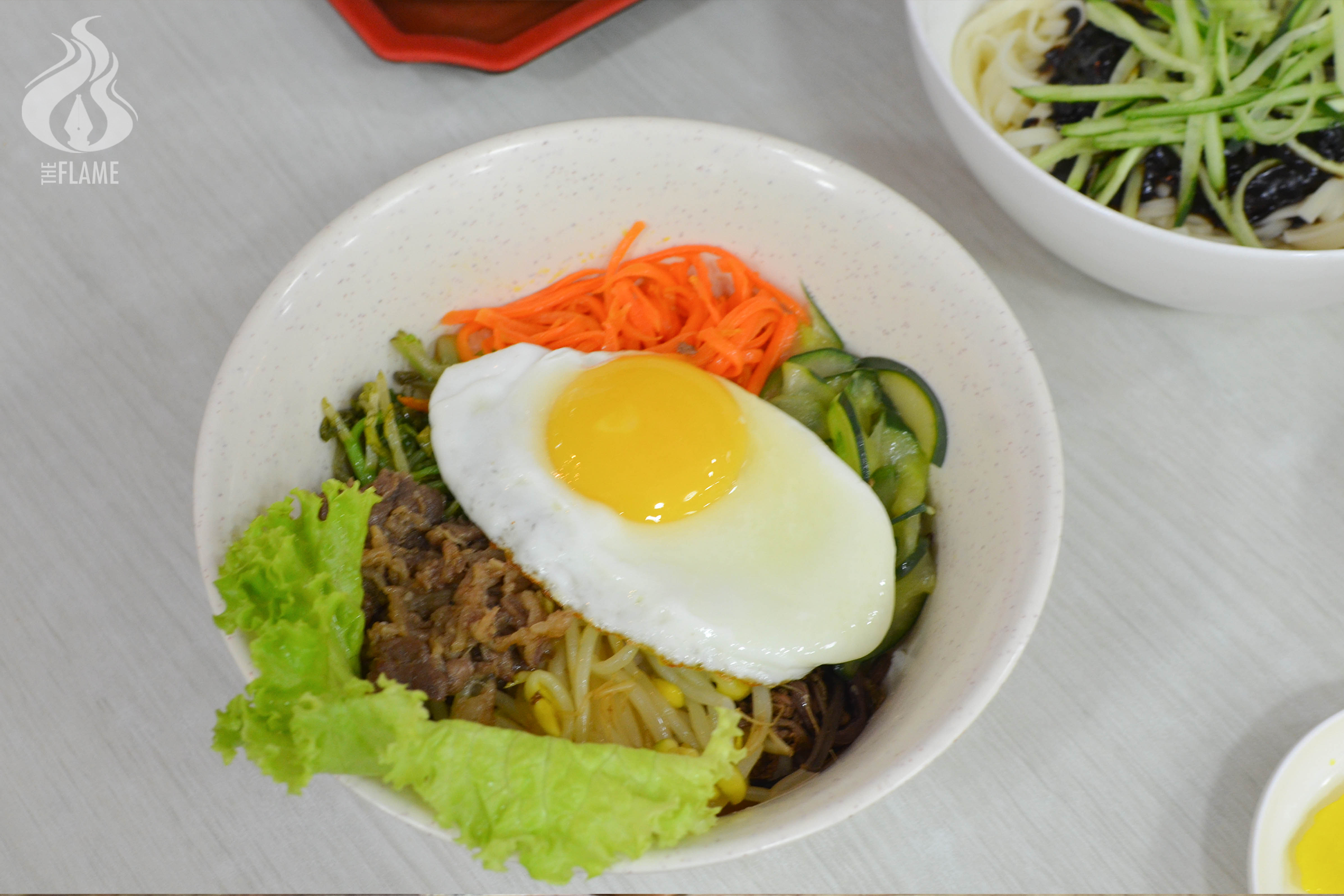 Another one of Hanayo’s bestsellers is its Bibimbap, a famous Korean dish that literally means mixing various ingredients with rice. The bowl offered a healthy array of vegetables such as thinly sliced carrots, cucumbers, bean sprouts, and spinach topped with a sunny-side-up egg.

The leafy taste of the vegetables is balanced well with the salty taste of the beef bulgogi. Altogether, it is made most savory when topped with Korean chili paste, coating it with a sweet and spicy finish. 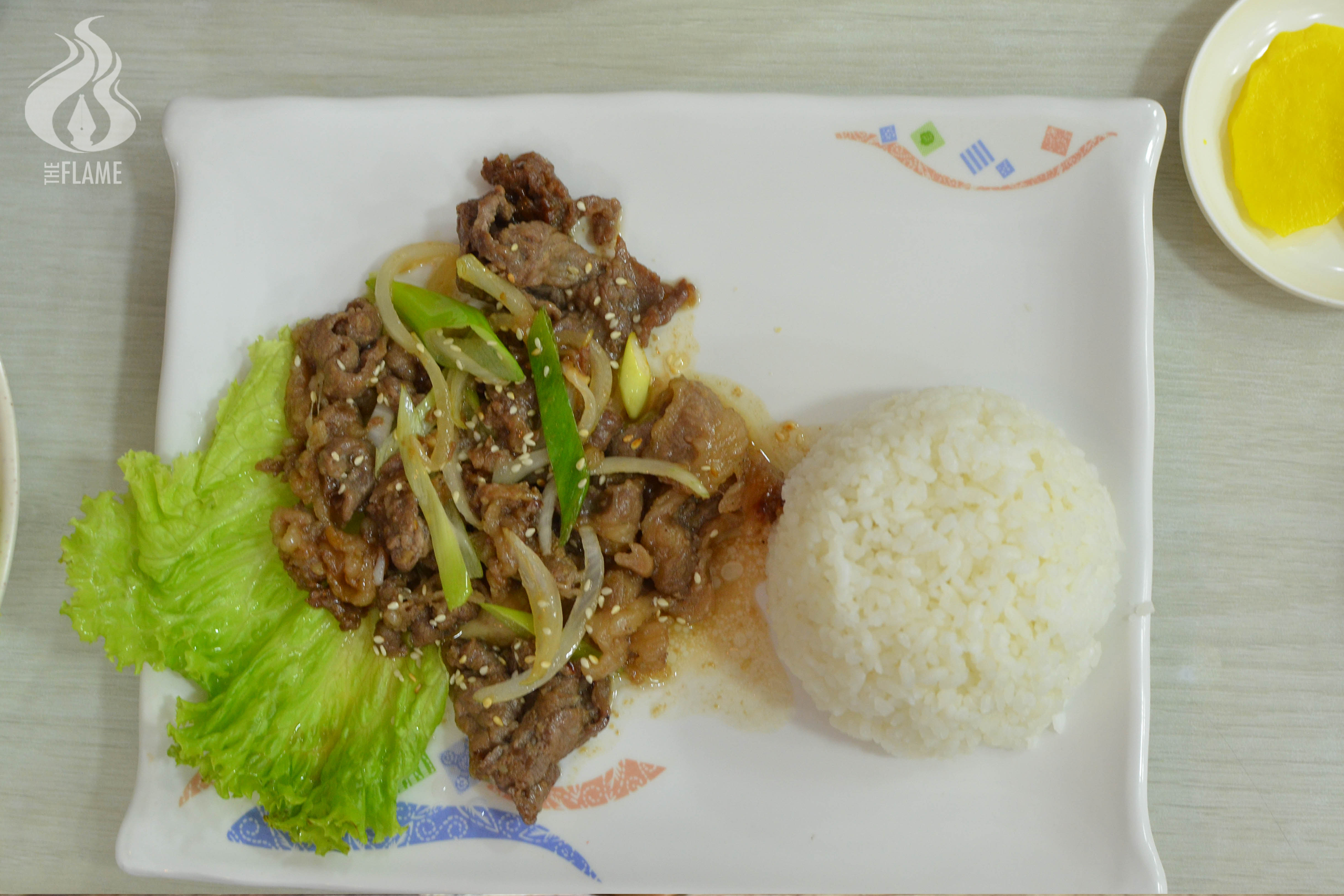 So Bulgogi is a dish made to tempt the tongues of meat lovers with its barbequed beef seasoned and tenderized until it fills the mouth with tides of sweet and salty touches. Soft and juicy, beef’s flavor stays strong the more it is chewed and complements well with the leafy lettuce on the side. 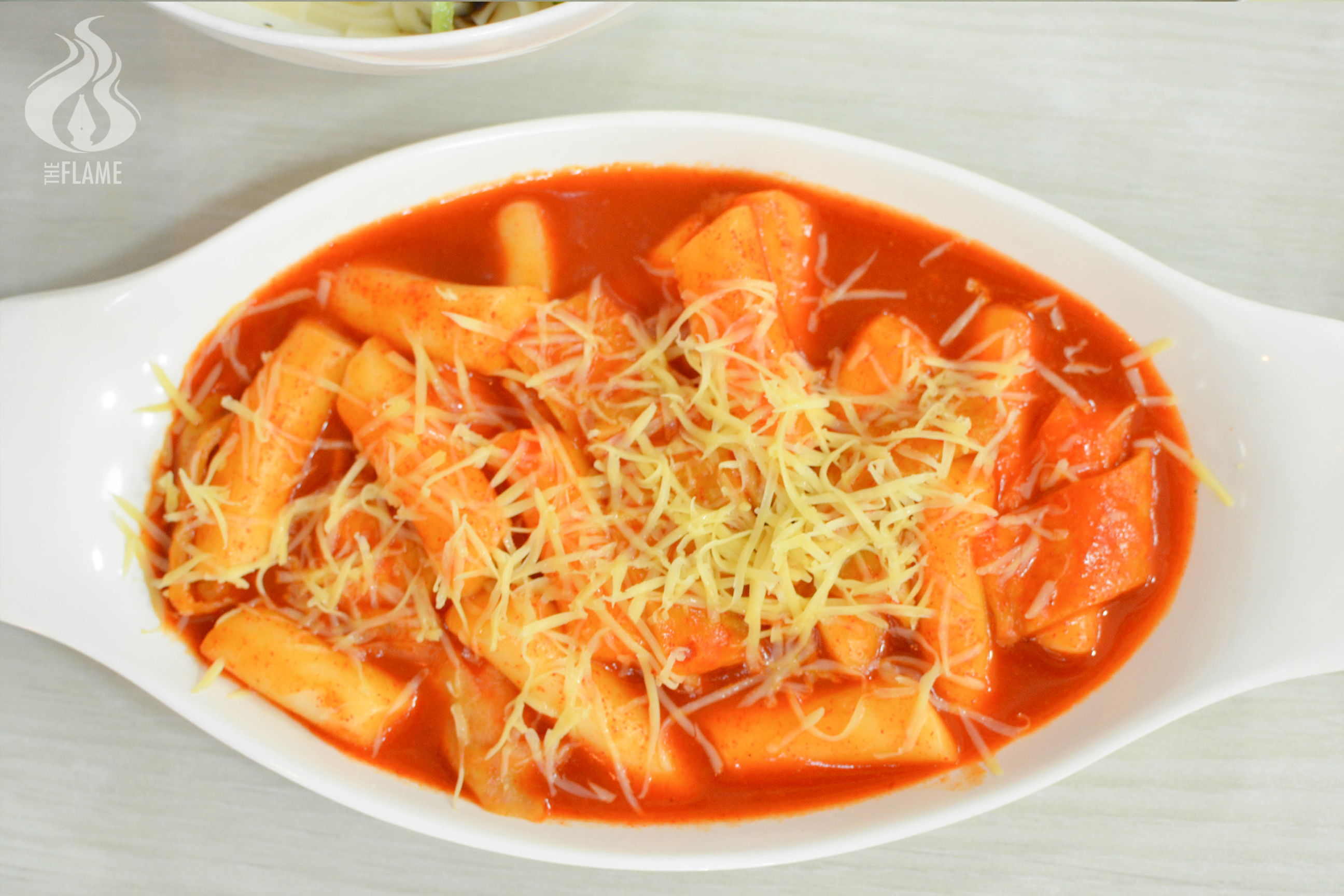 The meals are complemented with various side dishes that would rejuvenate one’s appetite such as Tok Pokki. It is a plateful of rice roll and fish cakes coated with a sauce that gives it a suggestive spiciness but at the same time has a strong and lasting impact on the taste buds. Other side dishes include egg rolls and yellow pickled radish.

A factor that added uniqueness to Hanayo is how it is connected to Seoul Salon, where customers could have a relaxing and enjoyable time getting their hair treated and groomed.

You said that he frequently saw students going around the UST area to eat and study with their friends or have a pleasant date with someone special, so he decided to add a salon to the restaurant to give customers something more than just food and drinks.

But the thing that You take the most pride in is the restaurant’s quality of home-style cooking, which he said differentiates their menu from other Korean food houses.

With the rise of fast-food restaurants, it is indeed difficult to find meals that are composed of simple but good ingredients that would not compromise one’s health. Hanayo may have a late start compared to other big restaurants, but it has not lost sight of its goal to provide customers with a taste that reminds them of home.