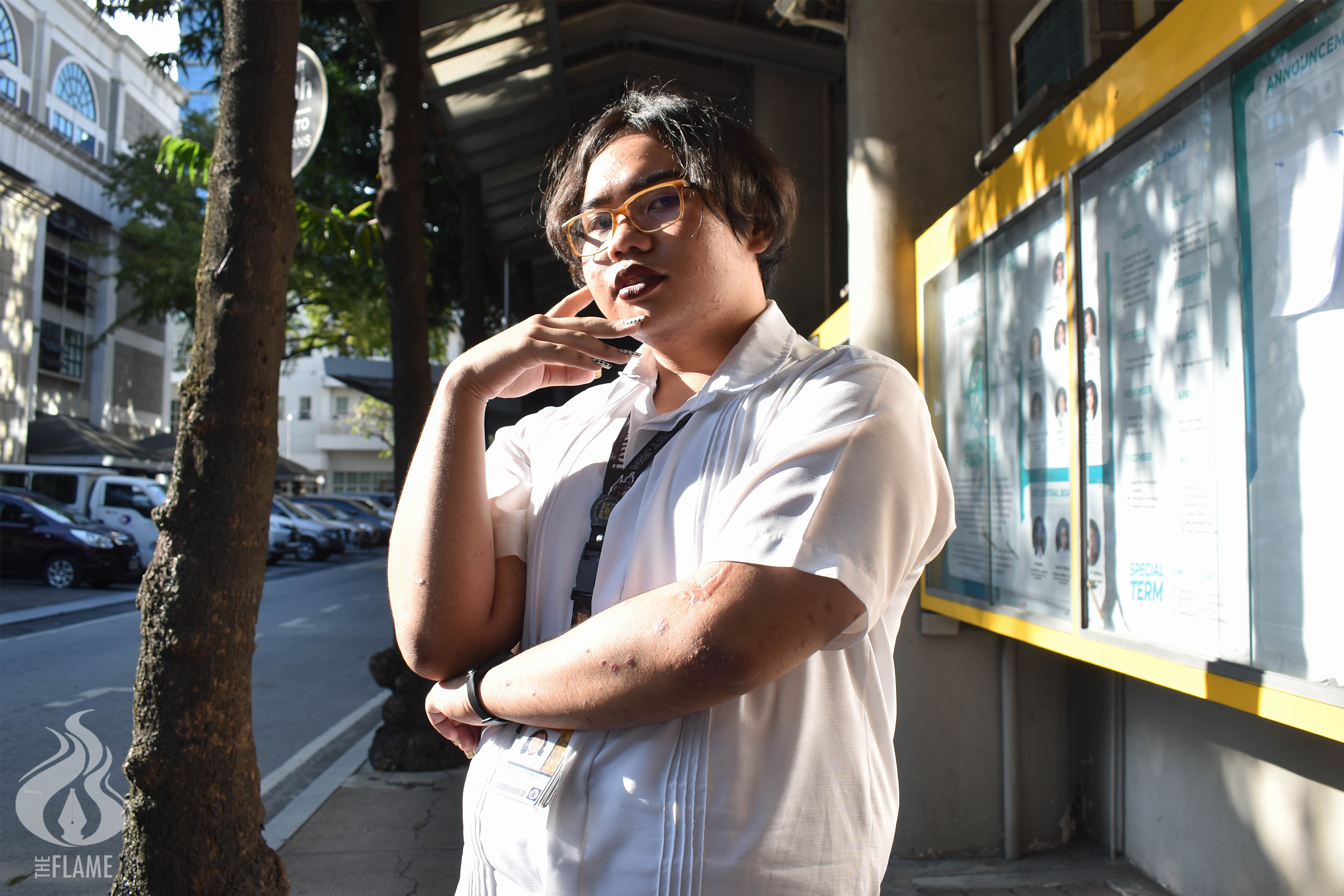 BACK IN high school, she had always readied herself with powder and a lip balm. Now, she never goes out without filling her eyebrows and adding a pop of color to her lips with lipstick. She puts on her crisp white polo shirt, black slacks, and goes out the door with a bag slung over her shoulders. Her long hair flows in the wind as her painted nails catch the attention of anyone she passes by.

Loreta Arroyo walks on campus with a strut in her step and an aura of confidence; very befitting of a student leader. As the president of the UST Journalism Society, she does the duties and responsibilities that come with the position, all the while showing her truest self as a transwoman.

A woman’s rise to power

Loreta was formerly the society’s auditor before running for presidency. She ran for the position because she looked up to the presidents before her, who were both women that inspired her. Wanting to become a student leader stemmed from her desire to prove that she is worth something, and the candidacy was the most opportune moment.

Her acceptance of identifying as a transwoman has helped her in becoming a leader because she does not question her identity anymore. She says, “It’s one less of a thorn in your chest when it comes to living your everyday life kasi wala ka nang pinoproblema. […] ang problema mo na is about your job as the president.” 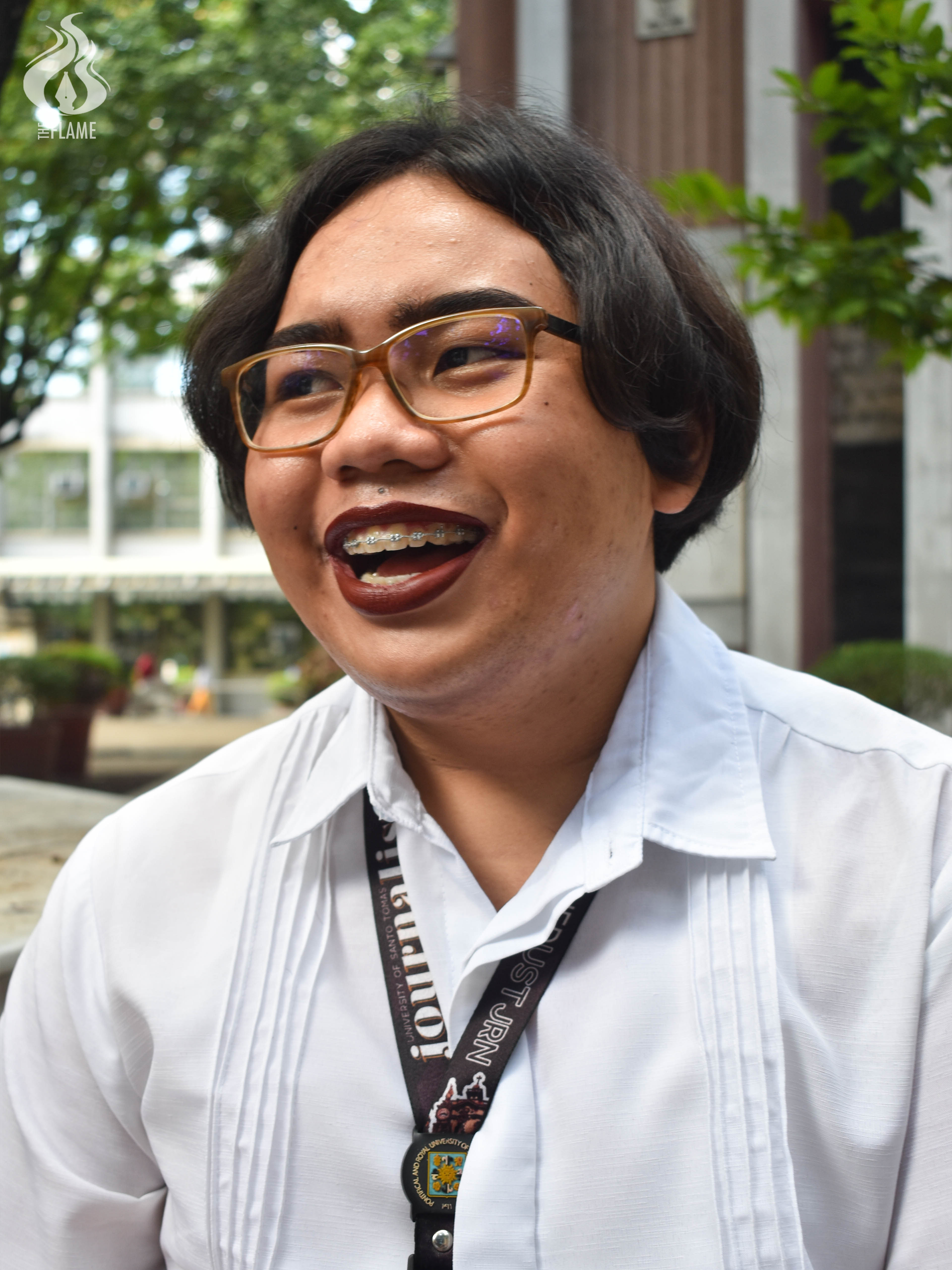 She had always been insecure of her gender identity ever since her high school years but it had only grown even more when she entered UST. In her freshman year, she felt that the new environment challenged  her sense of identity. Loreta was worried about how her block mates would perceive her, especially since it was her first time having female classmates. Even in college, she had many instances that made her unsure of herself. She could not go out without wearing makeup. She also felt especially frustrated when she would not be addressed by her preferred pronouns.

In terms of Loreta’s presidency, she  faced many obstacles, especially when catering to the needs and concerns of her fellow journalism majors. “Imagine, tatakbo ka pa lang, mayroon nang taong iniisip mong may prejudice against sa’yo and then ‘pag napunta ka na sa position, mayroon ulit mga taong magkakaroon ng prejudices against sa’yo kasi papasok pa lang sila sa UST and they have their own expectations,” she admits.

However, whenever she loses grasp of who she is, she reminds herself to be true to her identity. She says with conviction, “Kahit sabihin man nila na hindi ako ganoon or iba ako, it doesn’t matter kasi the only person who can know me is me.”

Loreta realized she was queer at a young age. Her journey to finding her true self continued on until she had reached high school when she came to terms with her gender identity. She claimed she had felt a “shocking relief”, saying “All this time na tinatanong mo kung ano ka talaga, kung sinong gusto mo, kung anong gusto mo, nagkasagot na”.

Despite the epiphany, her family reacted differently to her discovery. Her mother was very cautious since they come from a Catholic family with strong traditional beliefs, and thinking about the things their relatives would say about Loreta made her worry. Meanwhile, her father reacted negatively to her coming-out, leading to frequent arguments.

While it took some time for her father to accept her gender identity, he eventually did.  What Loreta did not expect was the support that she received from her relatives, who called her with her chosen name.

As a student leader who leads with pride and self-confidence, Loreta’s journey was not easy. She says that those who still feel lost with their identity to take it easy and to not rush the process.

“Mayroon kasi ngayong pressure to show yourself, to showcase yourself […] as someone who is the best version of yourself, [as if] there are no more room for mistakes, […] failures, […] experimentations. […] Find a way na hindi ka maging harsh sa sarili mo because other people tell you to be harsh on yourself. [..] You have to realize that everything takes time.” F