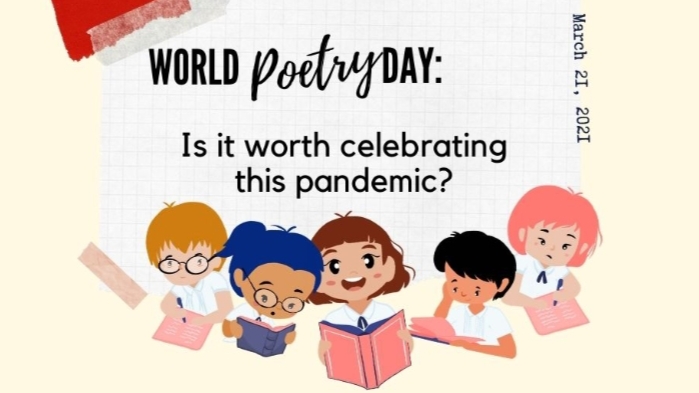 Since 1999, World Poetry Day scribbles three values on why we have to celebrate it. First, despite our differences, we are still human. Our emotions enable us to express ourselves through poetry. Even if a country has its unique poetry style, it always manifests similarities in other countries’ poetic elements. Second, poetry is a safety net for endangered languages, so communities can continue to rediscover, protect, and strengthen the language. Third, poetry as an art contributes to art forms and it brings an encompassing perspective on humanity and life.

Poetry, whether through writing or reading during quarantine, allows us to not just critically analyze the message of the poems and its authors, but also to assess ourselves. Others have published their poetry online to record this pandemic while some used poetry as a digital detox.

To begin a literary journey as we stay in the safety of our homes, The Flame highlights 10 poets to embrace another year of enriching poetic expression. To salute poetry, especially during the global crisis, this mini collection includes poems of life, love, isolation, daydreams, and sorrow from poets across countries.

Known for his work in horror and mystery, American writer Edgar Allan Poe has truly influenced the literary tradition. He unfolds his writings by using elements of modern detective stories.

Poe’s For Annie is no exemption. Though it depicts living life as a dreadful nightmare, the piece still finds hope and joy in the darkest of places.

Filipino writer Amado Hernandez penned about socio-political themes and social consciousness in his writing. He also divests Tagalog prose from its formal approach, creating his own style of poetry. For his works, he was awarded the title of  National Artists for Literature in 1973.

Isang Dipang Langit was written during his time in prison. The poem illustrates the sorrows of being restricted in detainment. In the poem, Hernandez positions the readers in deep strife, which makes them internalize how it feels like to be incarcerated. This deepens the poem’s message of endurance, as it highlights how long-awaited liberation is still possible.

Declared as a National Artist for Literature in 1999, Filipino poet Edith Tiempo has been lauded for her meticulous and open-minded writing style.

In Lament for the Littlest Fellow, Tiempo evokes strong emotions by balancing her accurate descriptions and symbols with an element of awe. The piece revolves around a wife battling against an invisible prison made by her husband. The marmoset symbolizes the wife’s satirical reflections. The rest of the poem’s symbols further describe marital rape, evoking the wife’s feelings of displeasure and tolerance for her situation.

Combining wit and sarcasm, National Artist for Literature 2003 Virgilio Almario is acclaimed for his critical views on themes such as injustice and hypocrisy. Through his works, he promotes the examination of one’s self and society.

Maya Angelou is an American poet highly acknowledged for her brazenly passionate voice. She is outspoken against oppression, supremacy, mistruths, marginalization, violence, and exploitation.

Angelou’s Caged Bird offers two juxtaposed representations of a free bird and a caged bird. The free one suggests an existence heaped with opportunities, while the caged one represents the gloomy days when one is desperate for freedom. The imagery of the bird’s cries as people choose to ignore it further emphasizes the message of oppression. Angelou uses repetition in the poem to signify the importance of defending the rights of the oppressed.

Honored as a teacher also, Filipino poet Cirilo Bautista emphasizes that literature should be treated as one with principles. He advocated imparting his knowledge through funding and conducting lectures and workshops for the youth. He believes that literature is significant in life as much as how life is integral to literature. He was awarded a National Artist for Literature in 2014.

His poem On Language acts as a plane ticket for those who miss traveling. Filled with vivid imagery of different cultures, Bautista perfectly recounts the feeling of speaking a new language in a foreign setting. He also succeeds in imparting relatable experiences without overlooking the serious issues attached to migration, such as discrimination.

Chilean poet Pablo Neruda pans out another flavor to poetry. Renowned for his varied and rich forms of poetry, the themes he covers include love, commonalities, material possessions, and legendary figures.

Neruda applies light and a positive approach to his One Hundred Love Sonnets: XVII. The poem’s subject confesses an honest and consistent love despite the uncertainties in life. The repetition of “I love you” evokes longing in the readers as it expounds the meaning of love beyond words.

Filipina poet Angela Manalang-Gloria utilizes feminist commentary in her poetry. The fight against toxic patriarchy is greatly depicted in her works as she defends the mistreated women through her poetry.

Her advocacy is loud and clear in Ermita in the Rain. Manalang-Gloria engrosses her readers through the unjust experiences of being a woman. The poem also makes readers realize the sacrifices women must make, as the subjects in the piece are shown to either keep their dreams on hold or live life at a dead end.

Famous for his children’s stories, English writer Rudyard Kipling is highly regarded for his poetry’s engaging argument and vigor. In 1907, he bagged the Nobel Prize for Literature.

If is the right poem to read when one is in need of motivation. Here, Kipling considers the youth as his audience. The “if” scenarios propose principles that can help readers deal with society. He recommends how to manage failures and victories in life. This poem also depicts human experiences and the potential of self-growth.

Maningning Miclat majorly represents introspection or inward-looking of the self. Through her poetry, she emphasizes the journey of the soul.

To Catch a Second and Turn it to Forever encapsulates the subject’s earnest longing for the time to spend only with good and lasting memories. Amid regrets and unexpected circumstances, Miclat portrays the desperation of the subject to feel alive again.

Without the actual words of “love” and “life,” this poem sends out a message of a love for life, even in the most common and shortest instances.

Poems offer us endless freedoms of our minds, hearts, and actions. They encourage us to be honest with ourselves and take responsibility for our lives. Although we encounter struggles each day, poetry can inspire us to keep moving forward.

Indeed, our bodies may be quarantined, but poetry proves that art goes beyond boundaries. F