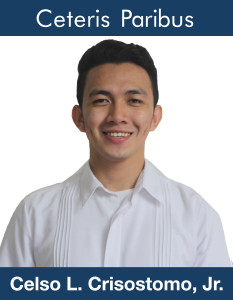 THE UNIVERSITY seemed resistant to change as majority of the Thomasian community expressed their opposition to the proposed flood “detention basin” underneath UST’s football field after President Benigno Aquino III made an innuendo to a “big university” in Manila rejecting the said proposal—referring to none but UST—during his last State of the Nation Address.

The catch basin project was initially proposed in 2011 by the Department of Public Works and Highways to end perennial flooding in Sampaloc and suburb areas by creating a retarding tank that will serve as storage for water during heavy rains.

UST, however, refused to it citing security concerns, possible disturbance of its regular activities, and historical and heritage standpoint.

While it is unfair to say that UST was selfish not to cooperate for the project’s success, its resistance to changes and innovations, on the other hand, suggests that it is seemingly only reactive, as opposed to being proactive but also critical of the project’s pros and cons.

The issue here is not about siding with what the government wants to promote nor with what UST wants to protect. It is about the idea of change itself and our openness to discourse.

It has been two years since the project was turned down by the jokingly-called “aquatic university,” a learning sanctuary that tested its inhabitants’ capacity to adapt in a changing environment.

The suspension of classes is no longer occasional but has become usual in the University during rainy season, now and then interrupting its regular academic activity.

In a macro perspective, the economic cost of flooding resulting to traffic jams amounts to P2 billion per day and is expected to triple at P6 billion per day in 2030 unless the problem is mitigated, a scientific study led by the Department of Science and Technology – Project NOAH showed.

With this in mind, what we should have addressed are the possible lapses of the proposed project—on the danger it might bring to our University once construction has started, on the assurance of its safety for the Thomasians, and on its sustainability in the long run—not just merely closing the door.

Instead of expressing distrust to the capacity of the government to realize this project and looking for its loop holes, UST must have taken this opportunity to propose improvements to it or devise an alternative infrastructure that will not jeopardize its community and preserve its heritage treasures, more so that the University produces the top engineers and architects in the country.

Putting all other things constant, UST’s preservation of its national treasures and the government’s effort to solve societal problems need not be mutually exclusive. The success of the project starts with this: a proposal developed by exchange of ideas and sealed by an efficient implementation—this is what UST and the government have to undergo. F